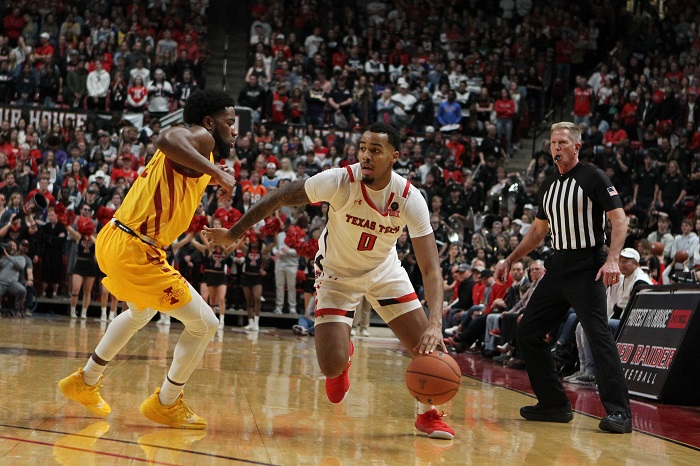 Selecting the Big 12 Conference’s Top 25 returning players for the 2020-21 basketball season was a difficult task.

Today we continue our Top 25 with Nos. 6-10 as we run up to the start of the season. At some point during this series, you’re going to hate me. That’s cool. That’s part of the job. Hit me up on Twitter at @PostinsPostcard if you agree or disagree. Or both. I’m happy to reply when I can.

First, any player considered must have played in the Big 12 last season. So, if you’re looking for our Freshman, Transfer or Rising Player stories, we ran those earlier this offseason. They won’t be included here.

Third, I am not “projecting” performance for the coming season. That will probably end up being the most disagreeable thing about this Top 25. I can’t project how players have improved over the summer or how they may fit in the configuration of their respective teams this coming season. There are too many factors at play. So the rankings are based on their performance LAST season. I will, however, provide a small sentence or two about how each player COULD fit into their team’s season. But it wasn’t a consideration for the rankings.

Bolton transferred from Penn State before last season and got an immediate waiver. By season’s end he was the best player on the floor for the Cyclones, as he earned All-Big 12 Honorable Mention last season. Bolton became an immediate starter and ended the season as one of the league’s top scorers, averaging 14.7 points per game. Bolton also averaged 3.4 rebounds, 2.8 assists and 1.1 steals per game. He emerged as a Top 20 player in a competitive conference and one could make the case that he was good enough to be on the conference’s third team.

Entering this season: Right off the bat he’s the No. 1 scoring options for the Cyclones. As his defense improves and more of the offense flows through him, a trip to the All-Big 12 First Team or Second Team is likely.

Some people forget that Manek, 6-foot-9, joined OU the same year Trae Young did, and in his junior season in Norman he led the Sooners in scoring (14.4 points per game). He also had 6.2

rebounds and 1.2 blocks per game, and shot nearly 39 percent from the 3-point line. Manek was an All-Big 12 Third-Team selection last year. He was one of the most consistent performers in the Big 12 last year, as he was one of the few players to be in the Top 12 in both scoring and rebounding in the conference by season’s end.

Entering this season: Manek enters his senior year rocking the Larry Bird ‘do (again) and eyeing a move up the Sooners’ all-time lists in scoring (now No. 31) and 3-pointers made (No. 7).

He was worth the way for the Bears, as Mitchell, 6-foot-2, had to sit out a year after transferring from Auburn. Last season Mitchell was the Big 12 Newcomer of the Year and earned a spot on its Third Team, Defensive Team and Newcomer Team, meaning he quickly earned the respect of coaches around the Big 12. Mitchell ended the season averaging just under 10 points per game and 3.7 assists per game. Mitchell was also among the Top 10 defenders in the conference, averaging 1.4 steals in Big 12 action.

Entering this season: More of the same, with a slight uptick in scoring.

Edwards built on his great play at the end of the Red Raiders run to the national championship game in 2019 and turned himself into one of the best players in the Big 12, as he averaged 11.4 points, 4.0 rebounds and 3.1 rebounds per game. While some of the Red Raiders rose and fell as the season went on, Edwards was their most consistent player, finishing among the Top 11 in assists. Edwards’ shot from distance got better as the season went on, as did his defense.

Entering this season: with the departure of Jahmi’us Ramsey and Davide Moretti, Edwards is the No. 1 returning scoring option from the perimeter. I expect him to be one of the conference’s best players.

Likekele was an All-Big 12 Honorable Mention pick last year, and you could argue that he was deserving of Third-Team mention at least. While the Cowboys were supposed to be built around their three seniors, Likekele became their driving force at the point. Likekele averaged 10.5 points, 5.6 rebounds, 4.5 assists and 1.9 steals per game, making him one of the most well-rounded players in the conference. Plus, he’s tough. At 6-foot-5, 215 pounds, he was one of the hardest players to deal with in the conference, regardless of position.

Entering this season: He’ll compete to be the top point guard in the Big 12 and be among the best points guards in the country.

Interview: Jarret Johnson, Inside the Red Raiders on Texas Tech’s Struggles
TCU and West Virginia Playing for Plenty This Weekend
To Top