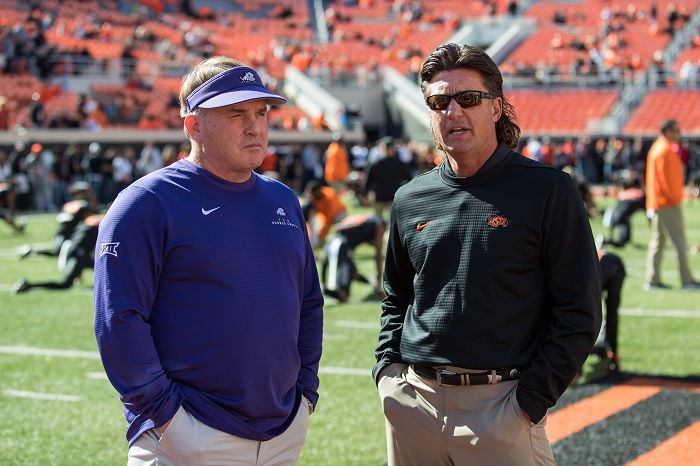 The Sooners had the weekend off and deserve to remain in the No. 1 spot this week. But it’ll all be on the line against Oklahoma State this weekend when Bedlam kicks off at 6:30 p.m. on ABC and we’ve got College GameDay heading to Norman for the big match up.

The Longhorns were also off this weekend (this will become a theme throughout these power rankings) and things have calmed down for Tom Herman off the field after two-straight wins over quality teams like Oklahoma State and West Virginia. However both games could’ve gone either way, so maybe Herman shouldn’t be feeling too safe, but to his credit he got the wins he needed and Texas still has a shot at reaching a Big 12 Championship Game, which seemed impossible two to three weeks ago.

The Pokes were also off last week and for the Cowboys’ sake we hope that they got to work with the offensive line which is holding back this offense. The OU defensive line is playing very well this week and will need to improve dramatically to give Spencer Sanders a chance this weekend. But this defense is stout and is it possible Bedlam becomes a defensive battle on Saturday?! Let’s wait and see!

Iowa State had the week off before Farmageddon this weekend. The Cyclones aren’t coming off their best performance against Baylor last week and now face a Kansas State team that has been a thorn in Matt Campbell’s side since arriving in Ames. He has more talent and experience this weekend, but the question is whether or not that’s enough to pull off a win?

The Mountaineers absolutely dominated TCU on Saturday. That left me wondering what could have been for this WVU team had a couple of plays gone differently this fall. The defense is outstanding and we are starting to see the offense get better every week and become more balanced as the passing game gets more efficient behind Jarret Doege. They’ve got two games left against OU and Iowa State that will tell us a lot.

The Wildcats are coming off a tough loss to Oklahoma State two weeks ago and had a bye week this past week before Farmageddon on Saturday. The week off could not have come at a better time for a young team likely starting to feel the effects of a lengthier college season take its toll. If Chris Klieman leads this team to a win on Saturday, K-State is right in the thick of the Big 12 Championship race with two games to play.

Give the Red Raiders this: They didn’t give up. Tech was down 20-6 in the third quarter to Baylor and came back to win the game. For a team that has been struggling and was in a double-digit hole, that’s a credit to Matt Wells who is starting to feel some heat from the Tech faithful. Also, credit to Alan Bowman for coming in at QB and leading this team back to a victory. I have no issue if Wells goes back to Bowman at QB moving forward.

TCU looked bad on Saturday in the loss to WVU. There’s no way around it. Sure it looks like TCU might be one year away, but this now makes it three-straight mediocre seasons in Fort Worth, which is unheard of under Gary Patterson. The offense is especially average (at best), while the defense is not living up to its usual standards. There’s no doubt this season has been another disappointment for the Frogs.

Speaking of disappointments, I don’t think anyone expected Baylor to be the team to compete for a Big 12 title for a second-straight year, but still. This is not what anyone expected. Baylor could end the season with just one win after the loss to Texas Tech on Saturday where they blew a 14-point second half lead, the same lead they blew to Iowa State the week prior. Then there were the ugly alleged death threats against QB Charlie Brewer after the game. Bad times in Waco.

The Jayhawks did not play this past weekend. That’s the best news for KU as it means they could not lose a game!

Big 12 Football Week 10: The Good, the Bad and the Ugly
Oklahoma Sooners Poised for Another Championship November
To Top