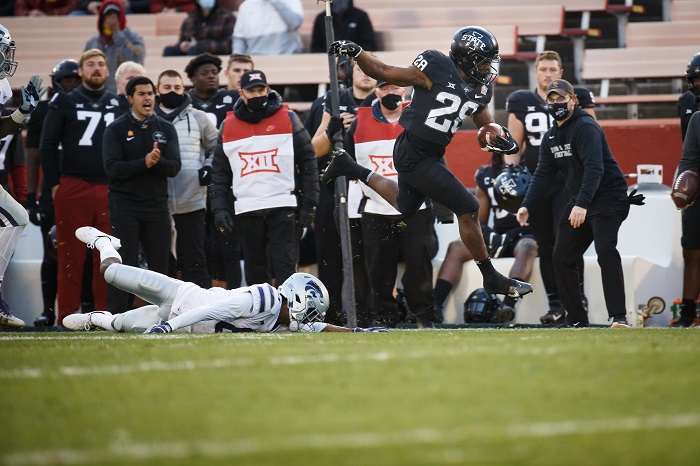 Farmaggedon? More like complete ass kicking. What a performance by Iowa State all around. Brock Purdy threw all three of his touchdown passes in the first half while Breece Hall continued his run to the Heisman as he piled up two rushing scores and went over 100 yards in the first half. At the break, the Cyclones led 35-0 and outgained Kansas State 363 to 74.

The defense held Kansas State scoreless the entire game and allowed just a total of 149 yards. The Wildcats stood no chance against this defense and I want to mention that Iowa State linebacker Mike Rose is on another level right now. This may have been the most complete game I have seen Iowa State play since their 2016 beatdown of Texas Tech and Patrick Mahomes.

With their largest win against Kansas State since 1943, Iowa State is that much closer to getting to Jerry World. The game on Friday against Texas is an essential playoff game as the winner will likely get their ticket punched to the Big 12 title game. So, go ahead, crack open that Busch Light and crank up Juicy Wiggle. You have earned it Iowa State fans. But keep in mind, Friday may be the biggest game for Iowa State in a long time.

Another Bedlam, another Sooners victory. Oklahoma continues to dominate this series and this time, they did it with a good running game an outstanding defense. Spencer Rattler was great tossing four touchdown passes and did not have a single turnover. Meanwhile the ground game excellent as Rhamondre Stevenson rushed for 141 yards on the evening.

But as good as the offense was at times, the defense played a complete game. They allowed just 13 points and held the Cowboys to under 300 yards overall. The defense suffocated the Cowboys offense and pitched a shutout in the second half.

It is a darn shame that this team struggled earlier in the year because right now, this team is playing like a top four team in the country. The offense is clicking, and the defense is playing lights out. Remember the Mike Stoops defense? Those days are long

There was no bad because what I saw from Kansas State and Oklahoma State was pathetic. It’s worse than bad.

I am almost at a loss of words for this performance. Kansas State got their butts handed to them on a silver platter and the Wildcats had ZERO answers on Saturday. From top to bottom, they were thoroughly dominated. Due to the score, Kansas State had to attempt to throw the football, which is not good and when Will Howard went out, Nick Ast came in and did nothing. 149 yards of offense is pathetic, and it was Kansas State’s lowest yardage total since the 2015 season. They could not run the football or throw it. It was a complete meltdown on offense.

And the defense was not any better than the offense. Giving up over 500 yards of offense overall and 35 points in the first half alone. Head Coach Chris Klieman said something interesting after the game. He said “I don’t want them to forget this feeling. This one needs to sting.” And Chris Klieman is right. He should be playing this game on a loop and come Farmaggedon next season, this team should be ready to play. This team still must play Texas and Baylor. We will find out a lot more about this team when they play a bad Baylor team next weekend. If they play like they did against Iowa State, forget it. They will not win another game.

I know the offensive line is a complete mess but my goodness. This was the best Oklahoma State team on paper since 2011? The defense finally broke as they gave up nearly 500 yards and over 40 points. In fact, the defense has given up over 21 points just once this season prior to this game and before the first half was over, the Sooners already put up 27.

And how bad is this offense right now? I understand the offensive line issues, but they were awful up front. The Cowboys could not run the football and between Spencer Sanders and Shane Illingworth, neither one could make a difference in the passing game as they combined to go 15 of 40 for 168 yards.

But what really made me scratch my head was Mike Gundy. Gundy is known for his lack of aggressiveness in Bedlam but seriously, Mike? Punting on your opponents 39-yard line down by 21 in the fourth quarter? You know what happened after they punted? Oklahoma scored. It baffles me to watch this staff when they face off against Oklahoma. With the loss, Mike Gundy is now 2-14 as a head coach in Bedlam. Yikes.