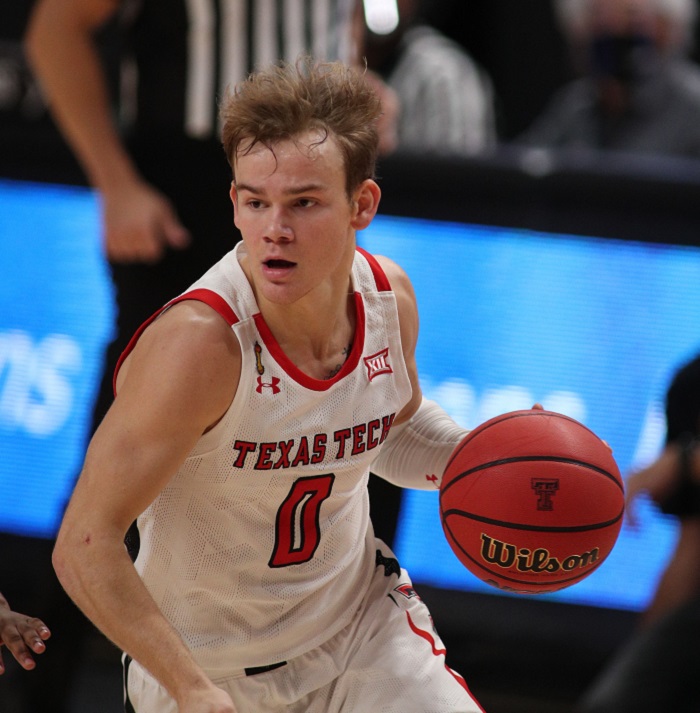 The No. 2 Baylor Bears finished off a spotless weekend in Las Vegas with a 86-52 on Sunday.

The Bears (2-0), of course, nearly didn’t have a game to play this past week after head coach Scott Drew was diagnosed with COVID-19 and the Bears had to cancel all three games. But the Bears found two quick games in Las Vegas, and thanks to four Bears in double figures, the Bears avenged their loss to the Huskies (0-1) from last year.

➡️ Texas Tech suffers its first loss of the season to No. 18 Houston.

➡️ TCU improves to 3-0 win with a win over Liberty.

➡️ Iowa State’s transfers, along with Rasir Bolton, lead the Cyclones to their first win.

About the game — The Bears tweaked the starting lineup just a bit, sliding Flo Thamba into the starting lineup as the lone forward, one game after the Bears went with Matthew Mayer, listed as a guard/forward, as the lone frontcourt player. That really didn’t pay off for the Bears, but they still managed to outrebound the Huskies, 48-15, thanks in part of Mark Vital’s incredible 15 rebounds (but, of course, if you’re a Bears fan or a Big 12 fan, you’re used to that from the senior guard). Jared Butler had the requisite big game, but the performance of  Jonathan Tchamwa Tchatchoua is intriguing. The transfer, who sat out last year, grabbed those rebounds the Bears were probably expecting Thamba to grab. So that could put Tchamwa Tchatchoua in the starting lineup when the Bears play Illinois and Gonzaga in the next seven days. Oh, and don’t forget guard Adam Flagler, who for the second game hit double figures in scoring off the bench. He could be this year’s Devonte Bandoo.

About the game — After two relatively easy games against Southland Conference opponents, the Red Raiders got their neutral site on against a ranked opponent at Dickies Arena in Fort Worth, Texas. But it didn’t go quite as planned, as the Cougars won their third game of the season and sent the Red Raiders to their first loss of the season. This was an off-game for both team, as they both shot below 50 percent from the floor. But Houston shot 11 percent better from the 3-point line and 25 percent better from the free-throw line, outscoring the Red Raiders a combined 40-25 in those two areas. That’s your ball game. Mac McClung had another great game, and true freshman Micah Peavy looks at home in the starting lineup, having scored 26 points in his first three games, though he went scoreless against Sam Houston State. As for the other big-time freshman, Nimari Burnett, he has 10 points in three games. But head coach Chris Beard played a six-man rotation against Houston. The opportunities for Burnett are bound to come.

About the game — Head coach Steve Prohm put all three of his eligible transfers on the floor to start the game — Jalen Coleman-Lands, Tyler Harris and Javon Johnson — and all of them played well. Coleman-Lands and Harris got immediate waivers or were graduate transfers and had a track record at their past institution. Johnson, who sat out last year after transferring from Troy, had 8 points, 3 rebounds, 5 assists and a steal. The fact that the newbies didn’t siphon off production from Rasir Bolton is promising. If nothing, they enhanced his ability to produce. Freshman guard Darlingtone Dubar got 22 minutes off the bench, scoring 7 points and grabbing 8 rebounds. For a season opener, it was a solid game. The one troubling spot, at least after one game, was the rebounding. The Cyclones got just 19 minutes from Solomon Young (and that could simply be to get Dubar and George Conditt IV more playing time) and UAPB had two players with 10 or more rebounds. Beyond that, the Cyclones were minus-8 on the glass and Dubar, a guard, was their leading rebounder. That won’t work against better teams. Finally, ballyhooed freshman Xavier Foster played 9 minutes in his debut and scored 4 points.

About the game — This was one of those relatively even games where one area sticks out — free-throw shooting. Liberty was 50 percent from the line and TCU was 75 percent from the line. In fact, TCU outscored the Flames by 8 at the line, led by RJ Nembhard, who went 8-for-9 at the stripe and where he scored 8 of his 14 points. After missing the first game, Nembhard seems to be rounding into shape, and once he gets his shooting back on track (3-of-10 from the floor on Sunday), he should fully re-assert himself as TCU’s leading scorer. The balance in this game is worth nothing. Kevin Samuel, Francisco Farabello and Taryn Todd each had 8 points. Todd is notable because he’s a redshirt freshman who has now scored at least 8 points in each of TCU’s first three games.