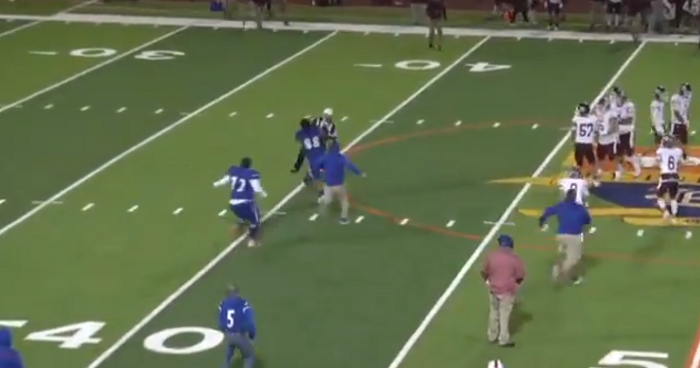 A Texas high school football game got ugly on Thursday night. Edinburg’s Emmanuel Duron tackled an official with a blindside hit after he was ejected from the game, according to videos that went viral on social media on Thursday night.

Duron is a junior who was ejected for a late hit and unsportsmanlike penalty against a Pharr-San Juan-Alamo player. His frustration is apparently what resulted in him tackling the official, who was reportedly being monitored for concussion-like symptoms but left the field under his own power.

Andrew McCulloch with The Monitor Newspaper reported, “Duron and [official] Fred Garcia exchanged words after the play was over, and Garcia ejected Duron from the contest after back-to-back unsportsmanlike penalties on the same play.”

But Duron isn’t just a standout football player, he is also considered one of the best wrestlers in the region, as he finished last season with a 44-8 record, going 4-2 at the state tournament.

When asked after the game about the incident, head coach JJ Leija told The Monitor, he “can’t release any information on that. And I apologize for that. I hope you understand.”

Here’s the video of the coach’s comments after the game, which Edinburg won 35-31.

Law enforcement also did not respond to The Monitor’s request for comment after the game.

Edinburg is a Class 6A school about 15 miles north of McAllen. Duron was escorted from Richard R. Flores Stadium by police from the stadium.

As the Dallas Morning News points out, this is not the first time a viral moment like this has happened at a Texas high school football game. But no matter where or when this happens, it’s always ugly. And it should be a reminder that in the end, it’s sports.

Now, according to The Monitor, Duron, 18, was charged with class A assault around 11 a.m. Friday morning during an arraignment at the Edinburg Municipal Court. A cash bond of $10,000 has been set for the senior football player.

The Edinburg CISD also released a statement with the decision to remove the Bobcats from the playoffs following the incident.

“The district has decided to remove the Edinburg High School football team from the playoffs after an unexpected incident involving a student that occurred during a football game on December 3, 2020,” the statement read. “We extend a sincere apology to the referee and his family. On behalf of the Edinburg CISD Board of Trustees and administration, we apologize to the athletes, staff, and our school community.

“We will take the appropriate disciplinary action once we understand the facts and circumstances underlining this incident. The district takes these matters very seriously; however, we cannot comment further on a pending investigation.”

Keaontay Ingram Becomes Third Texas Player to Opt Out of Season
Bob Stoops Will Not Coach vs. Baylor on Saturday
To Top