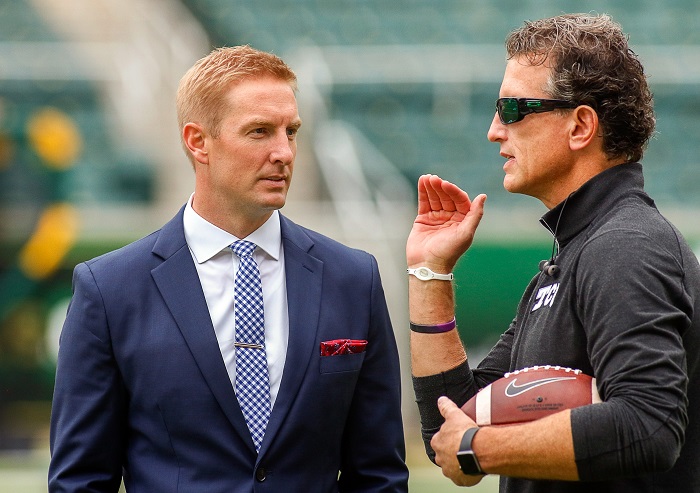 There’s been plenty of speculation as to what Tom Herman’s future should be with the Texas Longhorns. On Saturday, Texas went to Kansas State and blew out the Wildcats 69-31.

As the game was coming to an end, which was broadcast on FOX, color analyst Joel Klatt said, “There’s only one name out there, and if you don’t get it, let this guy build it.”

Of course, Klatt is referring to the rumors surrounding Urban Meyer, who the Longhorns are reportedly targeting.

Klatt’s comments are the same thoughts I shared on my Big 12 podcast this week. I admit, I’m personally not a fan of Tom Herman. But at the same time, if you look at this season, they’re a couple plays away from one loss on the season. Keaontay Ingram’s goal line fumble vs. TCU cost them that game, and a couple of poor coaching decisions against Iowa State might’ve changed the outcome last week.

Also, what other direction do you go? There’s no obvious name out there who is going to right the ship in a vastly better direction than what Herman is doing in the moment. Hugh Freeze? No. James Franklin? Anyone watched Penn State this year? Where else would you go?

Something else that Texas has rarely done under Herman, but finally did on Saturday, is blow out opponents. Herman’s teams have played up and down to competition. If Herman is going to save his job, Saturday was a good first step. Oh and he can thank five-star freshman running back Bijan Robinson, who rushed for over 19 yards per carry against Kansas State.

Herman reached the Big 12 Championship Game in 2018, but since then Texas is 14-8. This is all despite Texas recruiting Top 10 classes the last three seasons, but the 2021 class is ranked No. 17 in the country and is ranked behind the Oklahoma Sooners and their in-state rival Texas A&M Aggies. Herman’s recruiting has been vast improvement over the recruiting of his predecessor Charlie Strong, and the last years of the Mack Brown era.

Texas wraps up the 2020 regular season at the Kansas Jayhawks next week.