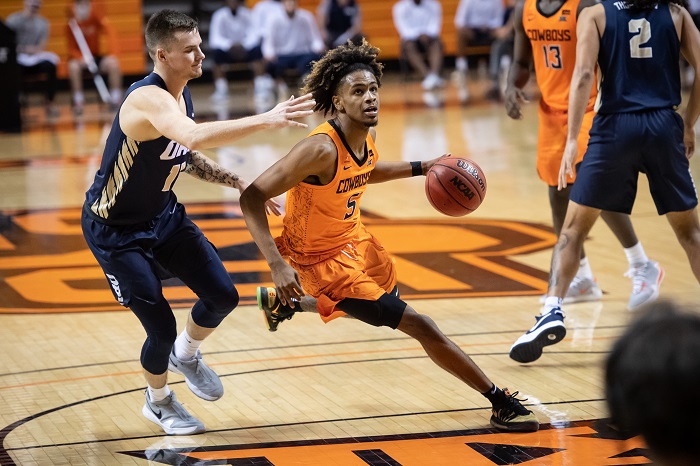 Last week I introduced you to OSU forward Matthew-Alexander Moncrieffe. Now, the next Cowboy basketball player to watch for is freshman guard Rondel Walker, who is quickly becoming a fan favorite in Stillwater after just his first five games.

Mike Boynton’s 2020 class seems to get clouded by Cade Cunningham, while the rest of the class gets lost in his 6 foot 8 shadow. But so far, Putnam City West standout Rondel Walker has shined in limited action this season.

The 6 foot 4, 170 pound guard was the No. 55 player in the ESPN Top-100 for 2020, enough to be unanimously considered a four-star talent, and was named the 2020 Jim Thorpe High School Player of the Year by the Oklahoma Sports Hall of Fame. After four years at Putnam City West high school in Oklahoma City, Walker became the school’s all-time leader in points and steals. His best season came in his senior year, where he averaged 25.8 points, 5.1 rebounds and 4.1 steals per game.

Walker is a tenacious defender and makes it clear why he nabbed 4.1 steals a game. Any time he is on the floor, he gives nothing less than 110%. His motor and hunger to cause disruption for opposing teams’ offenses has made him a fan favorite. He is reminiscent of a traditional Eddie Sutton-coached player, knowing that playing defense isn’t about hoping the other team misses the shot, but about making life hard as hell for them.

Walker can also splash it from behind the three point line and has excelled at finishing at the rim so far this season. He was actually Oklahoma State’s scoring leader in their win versus UT Arlington, putting up 19 points in 24 minutes. He was also teammates of fellow Cowboy freshmen Cade Cunnigham and Montreal Pena on their AAU team, the Texas Titans.

Expect Rondel to be making a big impact on both sides of the ball as the season goes on. He comes off the bench at the moment, but I wouldn’t be surprised if he snuck his way into the starting lineup at some point in the year based off of his hustle alone. He’ll be fun to watch for years to come.