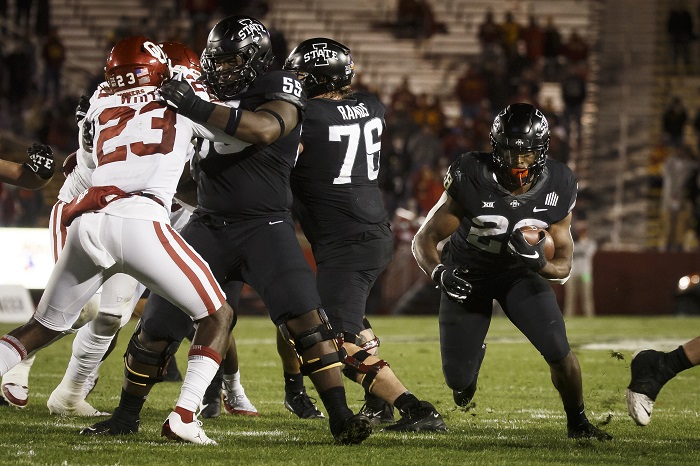 I will pick the best question for each mailbag and label it as my question of the week. The winner gets a free HCS Koozie to keep your beer cold (Unless you like it warm, but that’s just plain wrong). I want to thank each one of you who submitted a question this week and for tonight’s drink of choice, a Big Wave Golden Ale from Kona Brewing Company. Cheers and happy Big 12 Championship week!

This question comes from our Heartland College Sports message boards and as a reminder be sure to sign up for FREE to chat with our staff as well as other readers.

Here is the question: If the playoffs are expanded to 8 teams, which makes sense even though it is being fought against tooth and nail for some reason. Assuming there are P5 auto-bids, does the Big 12 continue with its conference championship game for the money even though it would serve no purpose in a round robin schedule?

@mlevere1988 asks: Can you explain why Oklahoma, ranked lower, has a better chance to get in the playoffs than Iowa State?

Duke: Well, certainly the logo on the helmet has nothing to do with it (wink, wink). Honestly, I have no clue why the Sooners would even get a sniff of the playoff even if they win on Saturday. They are on the outside looking in and to me, they do not even have half the shot the Cyclones do. But in the end, who cares, and I would not worry about it. The only Big 12 team that has a shot to make the playoff is Iowa State.

@wiggitwiggit asks: Scale of 1 to 10 (1 being not at all) how much is OU overlooking Iowa state?

Duke: I would say maybe a two or three. I do not think Oklahoma is overlooking Iowa State because of the respect Iowa State is not just getting in the Big 12 but nationally as well. Sure, it took the national media until now to give the Cyclones some respect, but Iowa State has been destroying their opponents in these last few games and I certainly

think they have the full attention of Lincoln Riley and company. Despite Oklahoma not being in playoff contention they do not want their Big 12 title reign to end anytime soon. There is a reason that Lincoln Riley has yet to lose a game in November or championship weekend.

@TristyMc asks: Going to be selfish and ask what direction y’all want to see TTU go on OC with the recent news.

Garrett coached at Appalachian State in 2019 and was the one of the main guys to help running back Darrynton Evans become the Sun Belt player of the year and get drafted in the third round. This past season as SMU offensive coordinator, his offense is 12th in the nation in total offense and 14th in passing offense. Riley is on his way up and Tech should scoop him up if they can. Worst case the offense is great, and Wells gets fired but I could totally see a guy like Garrett Riley as a head coach at Texas Tech.

@CoachBoeckman and @JakeConover1991 ask: We all just want your championship prediction and what you’re looking forward to most in the Big 12 title game?

Iowa State is averaging nearly 200 yards rushing per game and Oklahoma is giving up 88.1 rushing yards per game. That is what I will be watching for on Saturday the most.

Now for the tough part. My prediction. Unfortunately, I cannot give it to you at this moment as we will do a staff roundtable with our picks and opinions. So, you will have to wait for that later this week!