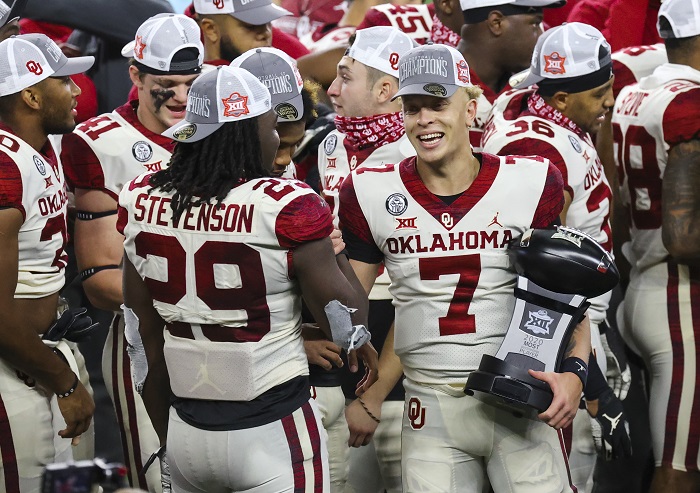 What a day and what a game. On Saturday we watched two teams worthy of winning a conference title battle it out and what a showdown it was. On the biggest stage of the year, Iowa State and Oklahoma had quite the game to remember.

Despite being down early, Iowa State came back and made things interesting late but ultimately fell short 27-21. Oklahoma remains on top of the Big 12 mountain as they win their sixth straight Big 12 championship.

There is a ton to take away from the game, but these are my five thoughts from the Big 12 Championship game.

As great as Brock Purdy has been since the second half of the Baylor game, today just was not meant to be. While he threw for over 300 yards and did a great job escaping pressure, his three interceptions were backbreaking for the Cyclones offense. The first one came in the red zone and was simply underthrown while the second one was also just a terrible throw. And as for the third and final turnover, it came on a crucial third down on the final drive as he threw it up for grabs rolling out to escape pressure. For just being named first team All-Big 12 quarterback, his performance did not help back that up.

There was a lot of disrespect towards this defense when it came to the All-Big 12 team on Thursday. Despite having a top 20 defense and the best defense in the conference statistically, Oklahoma did not have a single player named to the first team All-Big 12 defense. On Saturday, the defensive line dominated as they put pressure on Brock Purdy and really kept the Iowa State run game in check. Iowa State came into the game averaging nearly 200 yards on the ground per game and the Sooners held them to just 135 on the day. Of course, the three turnovers were a plus too. And how about Tre Brown? All he does is make big plays in conference championship games.

Special teams an area of the game that is often overlooked but in these big-time games, they become a crucial part of the game and can become momentum swingers. Unfortunately for Iowa State, Oklahoma dominated in every special team’s phase. Between Gabe Brkic’s long kicks, Reeves Mundshcau’s fantastic punts or Tre Brown’s kickoff returns, the Sooners easily had the edge there. It is clear the Cyclones still have issues in this area and to become a complete team, that is something that needs to change.

4. Hold You Head Up Iowa State

Iowa State has NOTHING to be ashamed of. Yes, they fell short on Saturday, but this program took yet another big step in the right direction to become a power in the Big 12. Of course, everyone is aware of what Matt Campbell has done in Ames but for this team

to do what they did during a pandemic is special. Many folks respect Iowa State but not many had this team playing for a Big 12 title come December. And despite losing to Louisiana Lafayette in the first game of the season, this team eight out of their last nine games to get a chance to play in Jerry World. Iowa State has yet to win a conference title since 1912 but I would be willing to bet that Matt Campbell will have this program playing for a few Big 12 championships in the next few years to try and end that streak. It was one heck of a season for this team and Cyclone fans should be excited for program moving forward.

Remember back in October when the Sooners had two losses, and everyone wrote them off early in the season? Some things never change and that appears to be true when it comes to Oklahoma winning Big 12 championships. Spencer Rattler comes back along with a great group of young wide outs next season. And if Alex Grinch is still coaching a defense that is getting deeper in terms of depth and talent, watch out Big 12 because someone will most likely have to beat Oklahoma in December to end their reign over the conference. Pretty soon, Lincoln Riley is going to run out of fingers to put rings on.