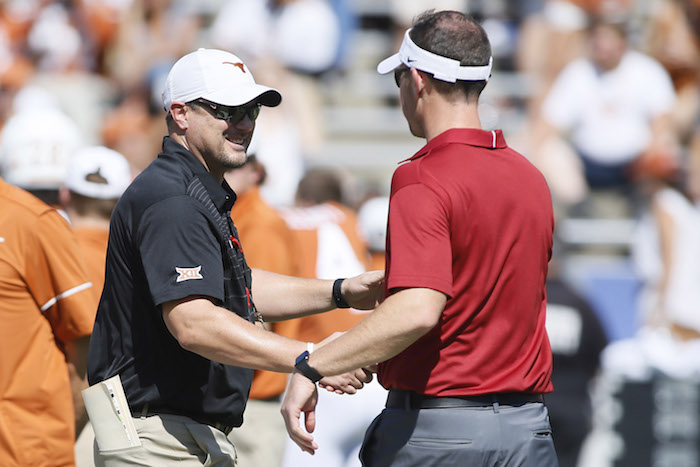 Another College Football Playoff selection show aired Sunday and this one was the least dramatic yet. I normally look forward to watching, but the announcement of the teams and their seeding this year was already a given well before the show aired. Alabama, Clemson, Ohio State, and Notre Dame were selected to compete for the national championship. The Big 12 wasn’t expected to get a team in this year because league champion Oklahoma had two losses, but if they had somehow been selected would it have mattered? I’m not sure Oklahoma would have been able to compete with Alabama or Clemson. That got me thinking…what does the Big 12 Conference need to do to have a representative worthy of winning the national championship in college football?

The four-team College Football Playoff has been in existence for seven years now. Alabama and Clemson have each been selected six times. Ohio State and the Oklahoma Sooners have each been selected four times. Alabama and Clemson have played each other for the championship three times and this year will likely be the fourth time in seven years. I’m starting to get really bored watching these two teams play. While Oklahoma has made four appearances, they have never won a game. They got embarrassed by LSU last year 63-28 and are 0-4 overall in their semifinal playoff games. What does Oklahoma, and the Big 12 in general, need to do to compete at the very top?

Recruiting needs to get better.

I have followed recruiting pretty closely for a long time, paying particular attention to the 247 Sports composite team rankings. In general, the teams with the best recruiting classes year after year are the teams that end up in the college football playoff. Here are the recruiting team ratings of Alabama, Clemson, Ohio State, and Oklahoma in the last six years. Rankings for each year are in parenthesis next to the year:

The only team other than Alabama, Clemson, and Ohio State to win the national championship in the last six years was LSU in 2019. Their average recruiting class ranking is 6.33. They had a bad season this year, but they’re going to rebound quickly because their recruiting classes have been very good lately.

Texas is the only school other than Oklahoma in the Big 12 that is recruiting near a top-five level. They had the eighth-ranked class in 2020, the third-ranked class in 2019, and the third-ranked class in 2018, In the past six years, Texas has averaged a 9.33 ranking. Interestingly, this matches what Clemson has done over the same time period and it is better than Oklahoma’s 11.5 average. Texas should be competing for the Big 12 and the College Football Playoff every year, but for some reason, they are not. That is probably a topic for a future article (or this one).

No other Big 12 team is recruiting nearly as well as Texas or Oklahoma. TCU is the closest, with classes normally ranked in the mid-twenties. While Texas is recruiting at the same level or maybe even a bit better than Clemson, they are not showing it on the field. If the Big 12 wants to get into the College Football Playoff every year and contend for a championship, the programs are going to have to recruit better (and maybe, in Texas’ case, coach better).

College football is top-heavy with the same teams competing for the championship year after year, and unless recruiting gets better, we’re going to continue to be frustrated watching Alabama, Clemson, and Ohio State battle it out every year with no Big 12 representative as a contender to win it all. Oklahoma and Texas have the best shot at getting it done, but they have to step it up a notch if they want to win the national championship in football.