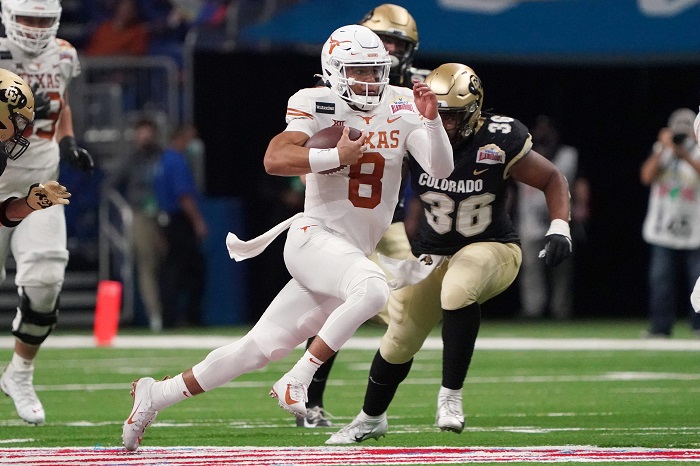 After the Texas Longhorns dominated the Colorado Buffaloes 55-23 in the Alamo Bowl on Tuesday night, the biggest question in Austin is now what is going to happen at quarterback.

Sam Ehlinger has not announced whether or not he will return to Texas in 2021, which he is allowed to do because the NCAA announced before the season that the 2020 season will not count towards a player’s eligibility.

And after watching Casey Thompson sling it in the second half of the Alamo Bowl, I feel even more certain that for as much as Sam Ehlinger did for the program, it is time to move on or risk Casey Thompson or Hudson Card transferring and affecting the future of the program.

Well now we have a little more drama in the “Will Sam Ehlinger return or not?” storylines.

Casey Thompson’s brother, Kendal, tweeted out after the Alamo Bowl, “Time to show the world what we already know bro! It’s your time now.”

Casey Thompson certainly made the case in 30 minutes of football that he looks like he is ready for his shot, but if Sam Ehlinger wants to come back to Texas, what then?

Thompson has been with the program for three seasons and has seen limited playing time. Would he decide to transfer and be eligible immediately somewhere else? Would Hudson Card, a four-star local product, hang around too or possibly leave? Card would be more likely to stay as he was part of the Class of 2020, but who could blame Thompson for finally wanting to get some playing time, especially after how he looked against Colorado?

This sets up to be a really interesting few days in The 40 Acres and we’ll keep you updated here at HeartlandCollegeSports.com.

Jericho Sims Selected No. 58 by Knicks in NBA Draft

Texas forward Jericho Sims is now a member of the New York Knicks, after he was taken in the second round at...

Greg Brown Selected No. 43 by Trail Blazers in NBA draft

Texas forward Greg Brown is now a member of the Portland Trail Blazers, after he was taken in the second round at...

Jared Butler Selected No. 40 by Jazz in NBA draft

Baylor guard Jared Butler is now a member of the Utah Jazz, after he was taken No. 40 overall in the second... 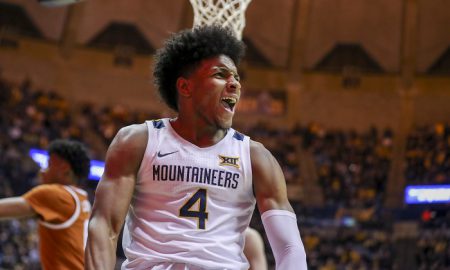 Miles McBride Selected No. 36 by Thunder, But Going to Knicks

West Virginia guard Miles McBride is now a member of the Oklahoma City Thunder, after he was taken No. 36 overall in...