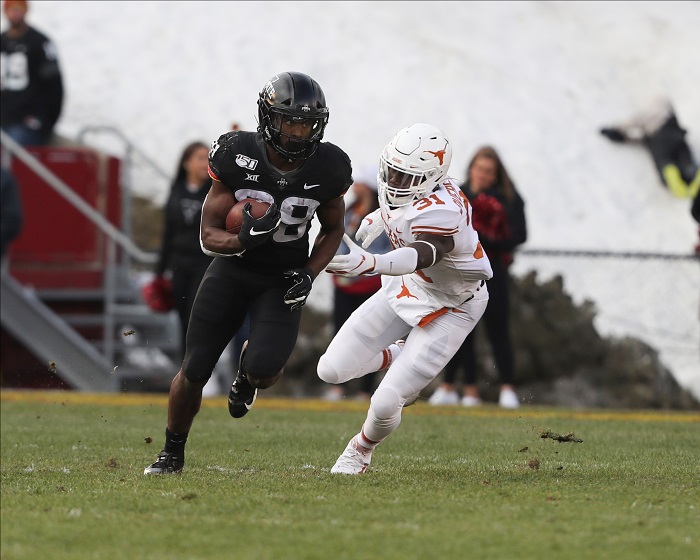 Iowa State running back Breece Hall continued his run first-team All-American selections on Friday, as he was the only Big 12 player to make the American Football Coaches Association’s All-America First Team.

Hall, who was already to the First Team of the Associated Press All-America team and the Football Writers Association of America All-America team earlier this week, will play for the Cyclones on Jan. 2 in the Fiesta Bowl against Oregon. Entering the game Hall has 1,436 rushing yards and 19 touchdowns.

The AFCA team is voted on by the game’s coaches.

Iowa State tight end Charlie Kolar made the cut for the second team. The junior tight end had 39 receptions for 538 yards and 6 touchdowns this season.

Oklahoma center Creed Humphrey, considered one of the best centers in college football, also made the Second Team. He is the reigning Big 12 Offensive Lineman of the Year.

Texas defensive end/linebacker Joseph Ossai made the second team defense as a defensive lineman. He had made the AP and FWAA First Teams as a linebacker. Ossai declared for the NFL Draft earlier this month after a junior season in which he had 55 tackles, 16 tackles for loss, five sacks and three forced fumbles.

TCU safety Trevon Moehrig made the cut after making 50 tackles, along with intercepting two passes and defending nine passes in 2020.

Baylor received a mention on the AFCA team, as Trestan Ebner was named the Second-Team All-Purpose player. The senior was the Big 12 Special Teams Player of the Year, was second in the Big 12 in kick-return average (32.2), first in kickoff returns for touchdowns (2) and fourth in all-purpose yards per game (116.3)