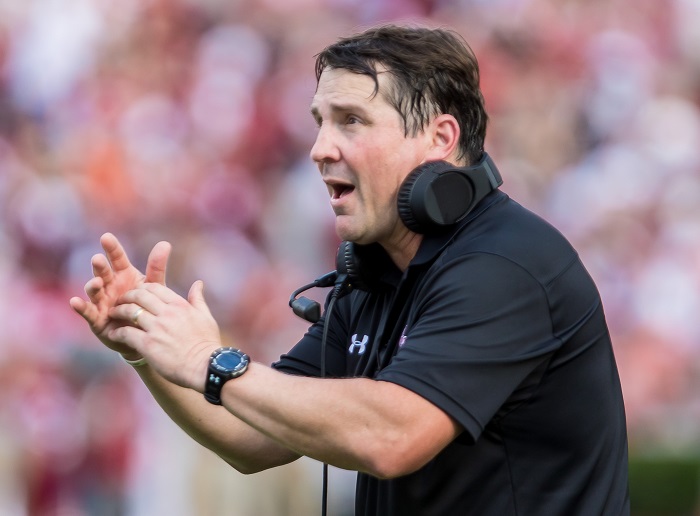 Will Muschamp had a chance to return to the Texas Longhorns as the defensive coordinator, but according to CBS Sports’ Dennis Dodd, Muschamp has turned down the offer.

Muschamp was most recently the head coach at South Carolina, but was fired after five seasons and a 28-30 record. Before becoming the head coach at Florida in 2010, Muschamp was the Texas Longhorns defensive coordinator under Mack Brown from 2008 to 2010. He was actually the coach-in-waiting behind Brown, but jumped at the Florida job before having the chance to take over the Longhorns.

The Texas Longhorns are revamping the entire staff after Tom Herman was fired and Steve Sarkisian was hired as the new head coach over the weekend. Sarkisian comes to Texas after spending the last couple of seasons with the Alabama Crimson Tide as the offensive coordinator under Nick Saban.

Most of Muschamp’s experience, and life, is in SEC country. He is from Georgia, played there, and was on the Auburn staff prior to his time at Texas. In fact, his three seasons with the Longhorns is his only experience in coaching at any level West of the Mississippi river.

This news of Sarkisian’s hire comes just weeks after Texas athletics director Chris Del Conte appeared to confirm Tom Herman would be returning as the Longhorns head coach in 2021. This appeared to be the end of the coaching change rumors in Austin, especially after Urban Meyer appeared to be out of the running for the job.

Whoever is hired as Texas’ defensive coordinator will be its third in three seasons, as Chris Ash was hired to replace Todd Orlando, who Tom Herman let go after a disappointing 2019 season.

Dennis Dodd also reports Barry Odom as being on the short list. Odom was the Arkansas defensive coordinator this past season, and prior to that was the head coach at Missouri where he helped the Tigers reach back-to-back SEC Championship games in 2013 and 2014.