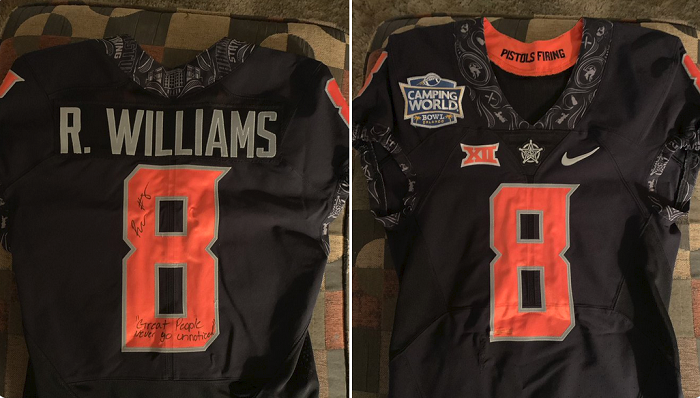 Sometimes we are all guilty of looking at athletes through the prism of what they do on a field or a court. But we need to and should always remember that they’re just like us, except with incredible athletic gifts that we will never possess. And in a moment of good will, we think it’s always important to share these stories, especially when it involves one of our own!

Here’s the tweet from Pro Football Focus that Beal commented on that caught Rodarius Williams’ attention.

Beall then commented with the following.

Rodarius Williams reached out directly to say he would send him a signed game jersey and one week later, Beall received his signed Camping World Bowl jersey.

Now that is a dude to root for. One of my favorite things about being a Big 12 fan is getting to follow all the teams’ players who make a go in the NFL. Whether they’re a big-time prospect like Baker Mayfield or Kyler Murray or an undrafted free agent who becomes a consistent contributor, it’s always something we can cheer for at the next level.

And now for Rodarius Williams, who I also believe will be a great pro, I think we can all agree that this is a guy worth getting behind following this awesome gesture.