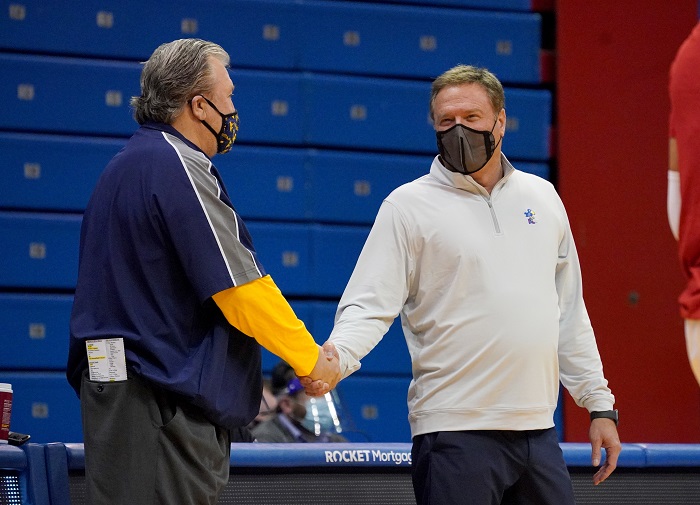 Welcome to the HCS Big 12 Basketball mailbag. This mailbag is for all you basketball junkies out there who root for a Big 12 school who not only have questions about your team, but other teams in the conference. So, join me, grab a cold brew or your favorite drink and relax as I answer all your Big 12 Basketball questions in my mailbag, which will appear each Friday.

I will pick the best question for each mailbag and label it as my question of the week. The winner gets a free HCS Koozie to keep your beer cold (Unless you like it warm, but that’s just plain wrong). I want to thank each one of you who submitted a question this week, and while my HCS colleague Derek Duke does this with a beer for his football mailbag, I tend to lean toward a Vodka and soda. This will be the first mailbag of the Big 12 Conference season. Thank you so much for your support and keep our Mailbag in mind as you think of more Big 12 questions. Cheers!

Our questions this week are less questions and more conversations on Twitter this week. One came in relation to a musing I had about Kansas’ Final Four chances.

@force_rob said about Kansas: ‘not a ff (final four) team.’

Well let’s discuss that a second. This response came following a tweet I put out during the Kansas-TCU game on Tuesday night (my handle is @postinspostcard by the way):

#RockChalk up 23 at the under-12 on #GoFrogs. Whether David McCormack can become a consistent force for the #Jayhawks (18 points tonight), in my opinion, will determine whether they’re a team that can get to the Final Four. #Big12MBB

Obviously I wasn’t predicting Kansas would make the Final Four. What I was driving at is that McCormack, the Jayhawks’ 6-foot-10 junior center, needs to be a consistent presence for Kansas moving forward. Frankly, he got off to a slow start this season. But, if you look at his play since the Big 12-Big East Battle game on Dec. 8 against Creighton, McCormack has hit double figures in four of his last six games, averaging 11.5 points per game.

I think the Jayhawks would take that scoring from him, but, frankly, they HAVE what they need in scoring between Jalen Wilson, Christian Braun, Marcus Garrett, Ochai Agbaji and whatever they can get from their bench. Where they really need consistency from McCormack is in the areas of rebounding and blocked shots. Texas took him out of that game in Saturday’s horrible loss in Lawrence, Kansas. During this six-game run McCormack has averaged 7.5 rebounds per game, including a pair of 11-rebound games against Omaha and West Virginia. As for the blocked shots, he’s right at one per game in the last six games.

If McCormack’s huge game against TCU — 20 points, 8 rebounds and 2 blocked shots — is any indication, I think he could reach 12 ppg, 8 rpg and 1.5 bpg by the end of the regular season. If that’s where McCormack ends up, that should be enough to support the rest of the Jayhawks as they reach the NCAA Tournament. The Jayhawks need it because, frankly, he’s their only legitimate option in the paint. And if he plays like that legit option, the Jayhawks have a real shot at the Final Four. If he doesn’t, they’re going to struggle against teams with significant size inside or solid tandems in the paint, such as Texas.

That takes us to this question about the pecking order of the Big 12 in the rest of the nation.

@PaulM88: Is the Big 12 the best and deepest conference in America? Or is there a case to be made elsewhere?”

I think the conversation about best and deepest right now comes down to two conferences — the Big 12 and the Big Ten.

Right now, if you take a look at Joe Lunardi’s Bracketology at ESPN.com, the Big Ten has the most bids in a 68-team field (10). The ACC follows with 9, while the SEC and the Big 12 have six each.

So why do I think the Big 12 is better than the ACC at this point? Both league have five ranked teams. Both leagues have about 75-80 percent of their teams at better than .500 right now. But the Big 12 has a higher tier of teams at the moment. Baylor, Texas and Kansas are among the Top 8 teams in the nation. The ACC doesn’t have a team in the Top 15. So while the ACC may send more teams to the ‘Big Dance,’ the Big 12 has more teams that look ‘Final Four’ ready in my opinion. To me, that puts them ahead of the ACC.

The Big 12 and the Big Ten have great teams and the top and immense depth, which means we could be looking at a Sweet 16 that features a significant presence from these two conferences. As to which one is better, I’m going to have to split the difference. I think the Big 12 is better among the elite teams and the Big Ten is better when it comes to depth. But both leagues have two months to change my mind.

Our next question is about surprises.

From @DoubleD_B12: Biggest surprise team so far this season?

I think I was asked this question by our Heartland College Sports site owner Pete Mundo for our weekly radio show and I think I left off a team that I probably should have focused on — TCU. The Horned Frogs have nine of their first 12 games of the season and enter the weekend a surprising 2-2 in league play (although they have Baylor on Saturday, sooooo… that’s gonna be a tough one). I wasn’t sure what to make of the Horned Frogs entering the season. I knew RJ Nembhard would be good (and he has to the tune of 18.2 ppg). I knew Kevin Samuel would anchor the paint (and he has with 10 ppg and 9.3 rpg). After that? No clue.

Well, true freshman Mike Miles has developed into their third scoring option and averages 13.6 ppg. Sophomore PJ Fuller has developed into a good fourth option and solid defender. Chuck O’Bannon Jr. appears to be settling into a bench role and producing. Forward Kevin Easley is watching his scoring average tip up. Eight players on this team average at least 5 points per game and that makes them a dangerous mid-range team to deal with in this conference. I think they can finish better than .500 in league action and give the Field of 68 a good run after finishing .500 a year ago.

Our last question is, well, more informational than education, but it came to me during the Kansas State-Texas Tech game on Tuesday.

Ah, EMAW. I was educated about that a couple of years ago when I sent out a tweet with a K-State hashtag and not an EMAW hashtag.

After that correction, I went to kstatesports.com to learn more about EMAW, which stands for ‘Every Man A Wildcat.” While the school’s web site isn’t clear about the origin, it indicates that “Tracing its roots back through decades of K-State athletics history, fans are unified behind the rallying cry, declaring they are all part of the Wildcat nation.”

So there you go. But I still use K-State on second reference in tweets. And, by the way, I know many K-State fans are, well, exhausted by yet another ‘reboot’ of the basketball program under Bruce Weber. But, you know what? I really like the chemistry the Wildcats are building and while it won’t pay off this season, it may just pay off soon. And our K-State contributor, Joe Mathieu, dropped a Good, Bad and Ugly piece just for K-State hoops on Thursday.

Talk to you next week. If you have a question, hit me up on Twitter @PostinsPostcard.

Kansas State Basketball: The Good, the Bad and the Ugly
Big 12 Football Proves it’s the Best, Deepest Conference in 2020 After Historic Bowl Season
To Top