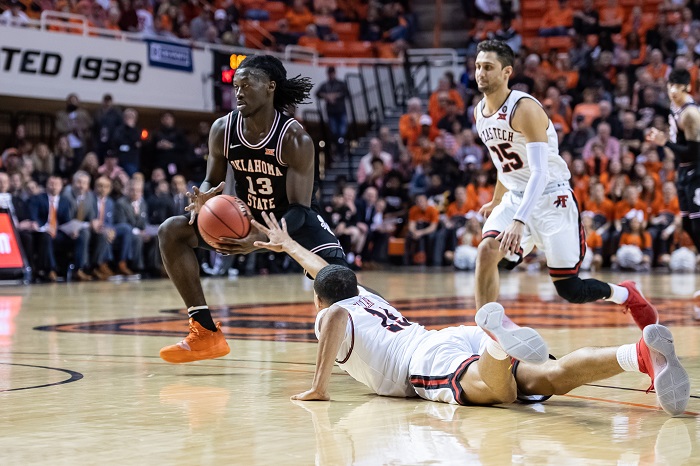 They call him ‘Ice’ for a reason. Oklahoma State point guard Isaac Likekele is one of the coolest customers in the Big 12 Conference.

The country is paying attention to super freshman Cade Cunningham, and there is certainly plenty of great reasons to pay attention to the Cowboys’ leading scorer. But, as sturdy as his 6-foot-5, 215-pound frame, Likekele’s play is the broad shoulders that carries the Cowboys from contest to contest and helps keep this push toward the postseason moving.

The increase in his offensive numbers comes with steady numbers as the facilitator of the offense (3.7 assists per game), solid perimeter defense (0.9 steals per game) and the best 3-point shooting of his career (50 percent). In fact, it was Likekele’s 3-pointer that tied the Kansas game Tuesday night at 70-all.

All of this improvement means that it’s unlikely that Likekele will be just an All-Big 12 Honorable Mention selection, as he was last year when he averaged 10.9 points, 5.6 rebounds, 4.5 assists and 1.9 steals per game. In fact, Likekele’s scoring and rebound averages have gone up each of his three seasons in Stillwater, as he was an instant starter his freshman year.

This is what leads some to believe that Likekele, a junior, could make the jump to the NBA after this season, a move that everyone expects from Cunningham.

But, before he contemplates that, the Cowboys (9-3 3-3 in Big 12) hope Likekele can lead them back to the NCAA Tournament. Wins like the Cowboys’ 75-70 win over No. 6 Kansas on Tuesday night can help seal the deal.

Likekele only scored 10 points against the Jayhawks, but Oklahoma State didn’t need him to have a high-scoring night. The youngsters — Cunningham, Bryce Williams, Rondel Walker and Avery Anderson III — had the most productive nights for the Cowboys. But that doesn’t mean Likekele’s presence wasn’t important.

He ran the point all night. He only had four rebounds, but on a couple of occasions he out-muscled Kansas center David McCormack to do it. He also dished out six assists and had three steals. And he played 38 minutes. It was a growth night for the entire team, as the Cowboys were eight days removed from blowing a 19-point lead to West Virginia and taking the loss. Against Kansas, the Cowboys DID give up a 16-point lead to the Jayhawks in the second half. But, this time, the Cowboys found a way to win, with Likekele’s 3-pointer setting up the final sequences of the game.

Should Likekele decide to leave for the NBA after this season, he’ll leave his mark in several places in the OSU record book. He is already just the seventh player in OSU history to record at least 200 assists, 300 rebounds and 100 steals for his career.

With his six assists against Kansas, Likekele now has 297 career assists and passed John Lucas (293) and Sean Sutton (295) on the all-time list. He now has Markel Brown (308) in his sights. In fact, there’s a good chance that at some point this season he could pass Kansas coach Bill Self, who had 319 assists during his career as a guard for the Cowboys from 1981-85.

With 107 career steals, Likekele needs 11 steals to pass Randy Rutherford (117) and move into the Top 25 all-time.

But all ‘Ice’ wants now is a trip to the NCAA Tournament. If the Cowboys get there, he will be a big reason why.

Oklahoma State Needs to Stop Playing Up or Down to Competition
Meeting Bob Stoops, Watching Darren Sproles and Appreciating the College Football HOF Class
To Top