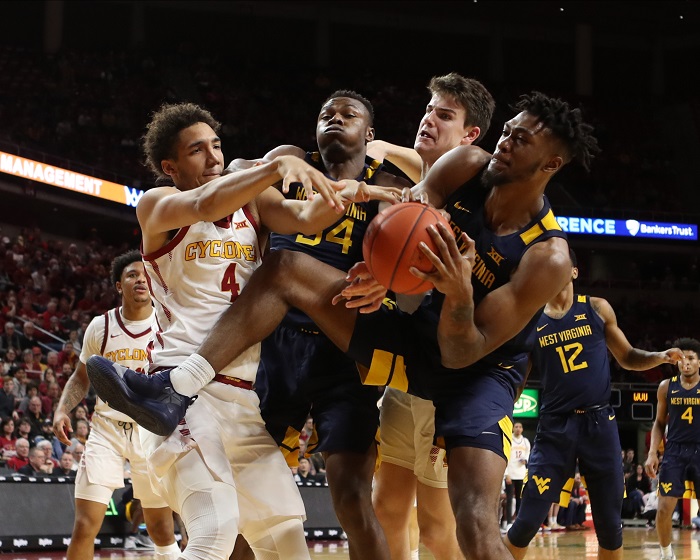 Welcome to the HCS Big 12 Basketball mailbag. This mailbag is for all you basketball junkies out there who root for a Big 12 school who not only have questions about your team, but other teams in the conference. So, join me, grab a cold brew or your favorite drink and relax as I answer all your Big 12 Basketball questions in my mailbag, which will appear each Friday.

I will pick the best question for each mailbag and label it as my question of the week. The winner gets a free HCS Koozie to keep your beer cold (Unless you like it warm, but that’s just plain wrong). I want to thank each one of you who submitted a question this week, and while my HCS colleague Derek Duke does this with a beer for his football mailbag, I tend to lean toward a Vodka and soda. This will be the third mailbag of the Big 12 Conference season. Thank you so much for your support and keep our Mailbag in mind as you think of more Big 12 questions. Cheers!

We have three questions this week and we start with the Iowa State Cyclones.

@CoachTManning asked “Why is it as soon as we are good at football we suck at basketball? Can’t we have both for once in the history of the school?”

Coach, I feel like you may have some issues, and we can certainly try and work through those here. But, first let me direct you to my piece earlier this week about Cyclones head coach Steve Prohm, as I ask whether Prohm is on the hot seat this season.

I feel your pain, dude. My alma mater, Stephen F. Austin, can’t get it together in that regard, either. But I think our football coach, Colby Carthel, is finally getting the football program to the level of the basketball program, led by Kyle Keller.

I can tell you that it’s hard to get football and basketball at an elite level at the same time (I mean look at Kansas if you need proof).

But it led me to wonder if the stars have EVER aligned at Iowa State, and what that might look like. I mean, 2018-19 wasn’t bad, right? The football team went 8-5, reached a bowl game and was ranked as high as No. 18, while the basketball team won the Big 12 Tournament.

And how about 1944? The basketball team starts the year by reaching the Final Four and the football team ends it with a 6-1-1 season.

OK, I’m stretching it. But you have a legit gripe, dude. Take it up with athletic director Jamie Pollard.

Intriguing. I don’t grade uniforms often, and when I do it’s usually “I like it, or I don’t like it.” So, after giving this some thought, here are my Top 3 for this season (in no particular order). For the sake of this exercise, I’m only considering home and/or road uniforms. Alternate uniforms and throwback uniforms, to me, are a whole other category (and Oklahoma State has so many I don’t know which ones are home and which ones are road anymore).

Baylor: Rest in peace, day-glo unis. Since the Bears made the turn back to their true green and gold roots, the Bears look 100 percent sharper and I don’t need to wear sunglasses to watch certain games.

Iowa State: The burgundy and gold is a really good combination together, whether it’s white-on-gold with the burgundy trim or the gold-on-burgundy the Cyclones wear on the road.

West Virginia: The Mountaineers made a nice tweak this year to their normal white-and-blue with ‘Mountaineers’ across the front in a sleek font that feels like a nice upgrade, home or road.

From @Big12Fan_72: Should they still play the Big 12-SEC Challenge next weekend, given the Big 12’s COVID-19 situation?

That’s a fair question. As of now the Big 12 has eight more games it must reschedule, and most involve multiple teams. So the league office and the athletic directors for those schools have some challenges ahead. If you’re going to cancel the Big 12-SEC Challenge, then you’re doing it with an eye on trying to use that Jan. 30 date to reschedule as many games as possible (and that’s assuming no more COVID pauses).

So, how many can the Big 12 realistically reschedule?

Well, first, as I was telling our Pete Mundo for this week’s Heartland College Sports Weekly radio show, the Big 12 is reaching the point where they have to prioritize games that have meaning in the Big 12 standings. If we’re basing it upon that, I would seek to reschedule the following games for Jan. 30, in place of the Big 12-SEC Challenge:

Texas at Baylor (was postponed Dec. 13);

And, just because we can, Kansas State at Iowa State (was postponed Jan. 13).

The only Big 12 Top 5 team not in action would be Kansas, because we just can’t work the Jayhawks in (their one postponed game is already rescheduled). So this would at least allow the remaining Big 12 contenders to get one more game in, and we would get that Texas-Baylor game we’ve long been anticipating.

Now, if we’re basing it on geography, trying to make the travel as easy as possible on the league’s membership for a quick game, we could try this:

That leaves out Kansas and West Virginia.

So, either way you prioritize it, by canceling the Big 12-SEC Challenge the Big 12 could, conceivably, reschedule half of its remaining postponed games, without having to impose three-game weeks on teams like West Virginia. The Mountaineers already face playing four games in the space of eight days in February.

If the Big 12’s desire is to play as many league games as possible, then canceling the Challenge would be a wise move, even though it would be short notice for everyone involved. I think it would make more sense for the league to cancel it and try to make life a bit easier on its membership this way.

But what do I know. I’m just a writer.

Talk to you next week. If you have a question, hit me up on Twitter @PostinsPostcard.