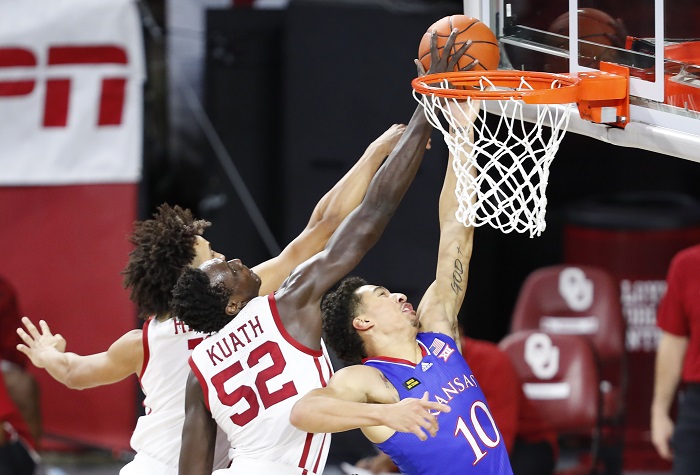 The Oklahoma Sooners are the third team in the AP Poll era to beat four Top 10 teams in the same month in the regular season, according to ESPN Stats and Info.

Saint Joseph’s lost in the East Region semifinals to Providence in the 1965 NCAA Tournament. NC State went on to win the 1974 NCAA national championship.

Oklahoma has won five straight games and went 6-2 for the month of January. In fact, OU’s last three wins have come against Top 10 teams. Plus, OU has played six Top 10 teams this month, going 4-2 against them.

The Sooners have also done this missing several players at various times due to COVID-19 protocols. Brady Manek and Jalen Hill missed games earlier in the month, and starters Austin Reaves and Alondes Williams missed Saturday’s win over Alabama.

The month of January started at home against West Virginia, when the Sooners defeated the then-No. 9 Mountaineers, 75-71, on Jan. 2.

The Sooners then ended the losing streak with an 82-46 win over TCU at home on Jan. 12, and had their Jan. 16 game with Oklahoma State postponed due to COVID-19 protocols.

The Sooners wrapped up the month with the win over Alabama.

And the ranked matchups don’t end there for the Sooners. Oklahoma has four games against currently ranked teams in its next five outings — at No. 10 Texas Tech on Monday, vs. No. 2 Baylor on Feb. 10, at No. 11 West Virginia on Feb. 13, and vs. No. 5 Texas on Feb. 16. Their only ‘breather’ comes Feb. 6 against Iowa State.