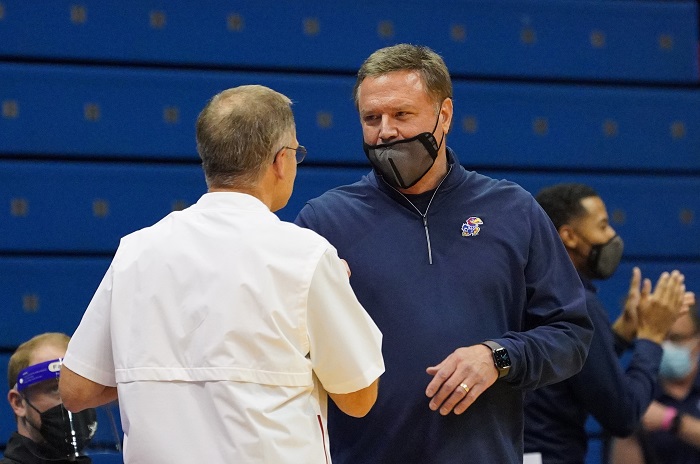 Baylor and Oklahoma remain No. 1 and No. 2 in the Heartland College Sports Big 12 men’s basketball power rankings as of Feb. 1.

All 10 Big 12 teams were back on the floor last week, which means that all 10 teams are eligible to be in the Power Rankings once again. Baylor remained undefeated, Oklahoma did incredible things and conference’s recognized national power continues its slide.

I wrote in my Big 12 Mailbag on Friday that I do believe that the Bears will lose a Big 12 game at some point. But their SEC Challenge game? Nope. I DID think it would be closer, though. These Bears seemed to have a bit of a rough patch in the middle of January, but they appear to be throwing the throttle down going into February, and that will be necessary when you look at the schedule ahead. The Bears have six games against ranked teams in February — and that DOESN’T include the game the Bears have to reschedule with Texas. So Baylor must play Texas and West Virginia twice, along with Kansas, Oklahoma and Texas Tech once. The Bears are going to lose one of those games. But, considering that Texas already has two Big 12 losses, the Bears seem destined for their first Big 12 regular-season title.

Ok, the Sooners beat three Top 10 teams in seven days. So, they won’t budge from this spot. The Sooners have now won five straight, guard De’Vion Harmon is playing the best basketball of his OU career, and — oh, hear comes Brady Manek, who scored 12 points off the bench against the Crimson Tide. Aside from Baylor, the Sooners are playing the best basketball in the Big 12 right now. OU gets a shot at another Top 10 team against Texas Tech on Monday. The Sooners hope to have Austin Reaves and Alondes Williams back for that one (both sat out Saturday due to COVID protocols).

Sooooooo…. After No. 2, we have four teams coming off COVID pauses and one of them had ANOTHER game canceled. At this point, your guess is as good as mine.

Results this past week: lost to Oklahoma, 80-79; vs. Kentucky, canceled.

The Longhorns played just once this week, but fell to Oklahoma short-handed. Shaka Smart was out after a positive COVID test, and three other players were out due to COVID protocols. So you could look at it as a positive that Texas remained competitive without two starters and their head coach. But Texas’ opportunity to redeem itself disappeared with Kentucky’s 48-hour pause. So as Texas re-enters the power rankings, they fall behind Oklahoma because of the loss, so effectively the Longhorns drop from No. 2 to No. 3, which is where they sat two weeks ago.

The Mountaineers played one of the best games in the Big 12 season on Monday, beating Texas Tech in the final seconds. WVU played a quality game against Florida too, before losing in the final seconds. The Mountaineers seem to have regrouped since their long COVID pause. The chemistry on this team is excellent. I know they face a significant scheduling disadvantage due to the COVID pause, but finishing in the Top 3 in this conference isn’t out of the question. And, if the Mountaineers can keep winning going into their back-to-back games against Baylor in a few weeks, there’s an outside chance they could really jack up the Big 12 race.

That loss to West Virginia on Monday hurt the Red Raiders in the conference standings, and they should feel a little guilty about not stealing one out of Morgantown. But at least the Red Raiders DID steal one in Baton Rouge on Saturday, which included a 12-0 run in the final minutes to rally for the win. That’s a quality road win to take back into Big 12 play this week. Terrence Shannon Jr. is the perfect weapon off the bench. I think he’s finally figured out how to be consistent, get warmed up quickly and make that immediate impact. Tech re-enters the power rankings after failing to play the week before.

Oklahoma State drops two spots here, but that’s because Texas and Texas Tech re-entered the power rankings this week and I have to respect where they were before the left the power rankings due to TCU’s and Iowa State’s COVID pauses. But that shouldn’t diminish a good week by the Cowboys, who beat Iowa State and then upended Arkansas. Cade Cunningham is finally back after sitting out the first two games after the program’s COVID pause, and he appears to be ready to kick it into overdrive in February. The better news? The players around him get better and better by the day.

Kansas is in a bad spot right now. The Jayhawks aren’t just not playing like their predecessors, they’re just not playing well, period. Scoring just 59 points against TCU is the biggest sign yet that this team is just, well, good, but nothing more. The first half of the TCU game and the second half of the Tennessee game were painful to watch. There’s a definitely chance the Jayhawks could fall out of the Top 25 at some point this season. Bill Self is a great coach, but he’s not a magician. Kansas has several games against ranked teams ahead, and the Jayhawks have lost their last three games against ranked teams.

TCU just came out of a COVID-19 pause and head Jamie Dixon is recovering from COVID-19. So we can cut them a bit of slack this week. The Horned Frogs had every chance to beat Kansas on the road and wasn’t able to finish the job, and that one is gonna haunt Dixon for a while. TCU needs to turn it around fast in Big 12 play or an NIT berth may not even be possible. Even though the Mizzou game turned out to be a loss, going from scoring 51 games against Kansas to 98 points against Missouri may signal a turnaround is possible.

I thought we might be able to have a conversation about whether TCU might be worse than Kansas State. And then the Baylor loss happened. And I think Kansas State is where they should be for now. But I’m now intrigued by the Sunflower State Showdown game with Kansas this week. The Wildcats shouldn’t win, but this Kansas team is, well, not a Kansas team. By the way, Nijel Pack is BACK after his long pause from the lineup. After scoring 11 points against Baylor, he blew up for 26 points against Texas A&M. The Wildcats sorely need him.

Iowa State wasn’t ranked last week due to a COVID-19 pause. When the Cyclones came out of it, they were shorthanded, suffered a 21-point loss to Oklahoma State and then fell to Mississippi State in the Big 12-SEC Challenge. There’s not much to say at this point. They’re the worst team in the conference. I wrote a couple of weeks ago about whether Cyclones head coach Steve Prohm is on the hot seat. I feel like it might be getting warmer now.