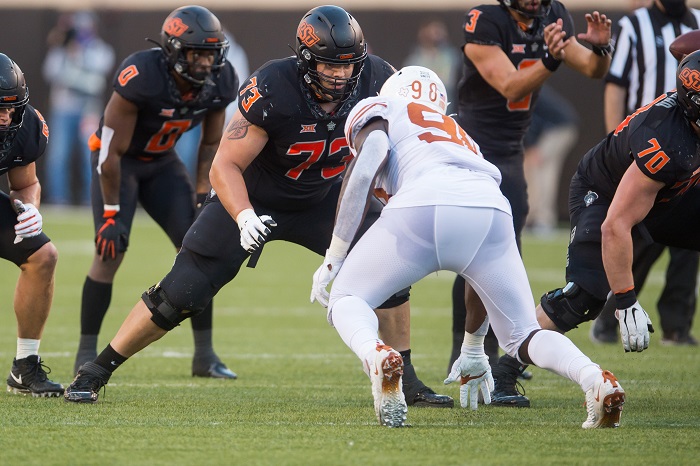 NFL Draft analyst Mel Kiper has long been the most trusted and credible source when it comes to the NFL Draft. More often than not, his predictions seem to match the draft results more accurately than other analysts. Meaning, if you’re a player slated to be a first-round selection according to him, you shouldn’t take that lightly.

Oklahoma State tackle Teven Jenkins solidified his draft stock after a stellar senior season which saw him earn All-Big 12 First Team honors. He was originally seen as one of the top ten offensive tackles in this year’s draft, but recently he’s gotten more hype among experts such as Kiper.

So much so, that Kiper has him going No. 20 overall in the 2021 Draft to the Chicago Bears.

Should this pick come to fruition, Jenkins would become the first Oklahoma State football player to be drafted in the first round since Justin Gilbert in 2014. Nearly seven years.

It is shocking considering the talent that has come out of Stillwater in recent years. James Washington, Chris Carson and Emmanuel Ogbah have all carved out successful careers thus far since getting drafted, but none went in the first night. Ogbah was one pick away in 2016, getting picked up with the first pick of the second round by the Cleveland Browns, 32nd overall.

Wide receiver Tylan Wallace has also been listed to go in the first round by some experts, but most have him going in the second round. Chuba Hubbard is slotted for the fourth or fifth round, and Rodarius Williams the fifth or sixth round.

So all eyes will be on Oklahoma State offensive lineman Teven Jenkins, who will try to snap the streak of first round misses for the Cowboys in the NFL Draft. Can he do it? The experts think so, but time will tell.

Predicting the Big 12 Conference Basketball Awards for 2020-21 Season
Should the Big 12 Tournament be Cancelled to Protect the NCAA Tournament?
To Top