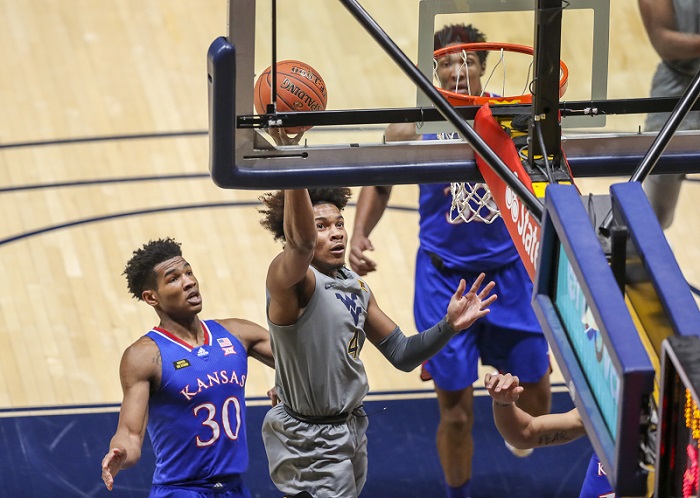 Saturday was a coming-out party for the sophomore, who had the best game of his career against No. 6 Texas. Boone scored a career-high 22 points, pulled down 15 points and had five blocked shots, some of which came down the stretch in a double-overtime win over the Longhorns. It’s the second time in three games that Boone has registered a double-double, and the fourth time in five games he’s hit double figures in scoring.

An odd pick? Maybe. But the Sooners had an up-and-down week, losing short-handed to Texas Tech and then beating Iowa State in a slugfest. Gibson was the most consistent thing about the Sooners in both games. Against Texas Tech he scored 14 points and grabbed seven rebounds. Then, against Iowa State, he pulled in 18 points and five rebounds. Plus, Gibson shot nearly 50 percent from the 3-point line. He can start and he can come off the bench with equal quality.

McBride had a huge game against Kansas, scoring 29 points, along with grabbing seven rebounds and dishing out eight assists. That cemented his place here this week. Now, he didn’t have a great scoring game against Iowa State earlier in the week (just 9 points). But he had eight rebounds and three assists, and that’s a great thing to see from a player when they’re not having a quality game offensively.

He’s on the list for the second straight week, even though the Bears were only able to play one game due to a COVID-19 pause. Against No. 6 Texas, Mitchell continued his scorching play, scoring 27 points on 11-of-16 shooting (including five 3-pointers). It’s one of the reasons Mitchell is starting to gather attention as a potential NBA Draft early entry after this season.

It’s time to give the sophomore a little love. Head coach Chris Beard calls him the Red Raiders’ glue guy, and in two wins this week he was their most consistent player. Against Oklahoma, McCullar had 13 points, eight rebounds, two assists, and four steals as the Red Raiders cooled off the Sooners. Then, on Saturday, McCullar pulled down 15 points, six rebounds and four assists in the win over Kansas State.

I’m going to cheat a little here because Manek deserves some recognition after some sluggish play after the Sooners’ COVID pause. Off the bench against Texas Tech, Manek had 11 points and seven rebounds in 28 minutes. He then returned to the starting lineup on Saturday against Iowa State and had a career-high 15 rebounds and four assists, along with scoring nine points. The Manek we’re used to seeing is finally back.