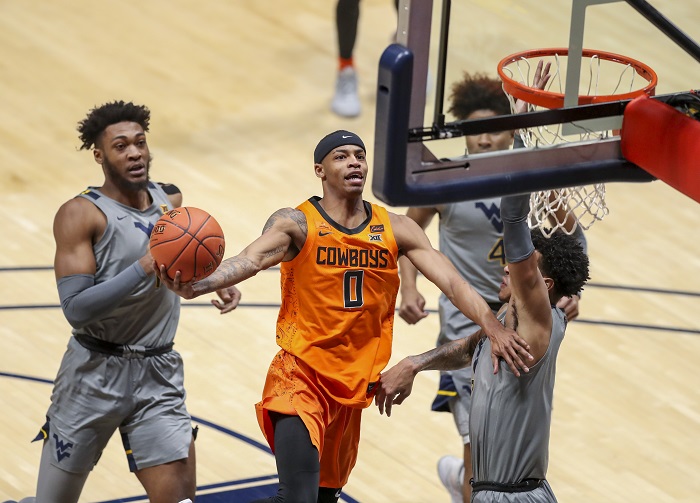 Anderson just gave us all a preview of what we COULD see in 2021-22. The sophomore completely took over for the Cowboys in their huge win over West Virginia on Saturday, scoring 31 points, including a late basket to put the Cowboys in complete control. That game pushed his regular-season average to 11.1 points per game and positions him to be a player to watch next season.

Edwards had two great games for the Red Raiders. He scored 20 points and had four assists against TCU, and then wrapped up the regular season with 18 points and five rebounds against Baylor. Sure, the Red Raiders lost that game. But Edwards is entering the Big 12 Tournament with double figures in scoring in each of his last four games.

The centerpiece of his week was a tremendous effort against Oklahoma — 16 points, 12 rebounds, and 2 blocked shots. That was a win the Longhorns needed to further burnish their credentials for NCAA Tournament seeding. Then Sims had another big game on Sunday against TCU, finishing with 13 points and three rebounds. He’s heading into the Big 12 Tournament with some great personal momentum.

Baylor had an incredible week, winning its first conference title since 1950 and clinching the No. 1 seed in the Big 12 Tournament. If Teague decides not to use the extra year of eligibility the NCAA has afforded him, then he had a historic senior night on Sunday against Texas Tech, pouring in 35 points on 10-of-12 shooting from the 3-point line. His made three-pointers tied the single-game Baylor record.

Senior Day was good to Vital, too, who had a double-double in the win over Texas Tech, as he scored 10 points and grabbed 15 rebounds. Vital is one of the most unique players in the country, a guard with forward skills who does all the dirty work for the Bears on the perimeter (and this is a team where the star guards don’t mind doing dirty work, either).

Baylor at West Virginia was the biggest game of the week, and Mayer came through with a huge game in the win over the Mountaineers. Mayer had 18 points and five rebounds off the bench, including a trio of 3-pointers. His 19 points and seven rebounds in a win over Oklahoma State put him over the top in this category.