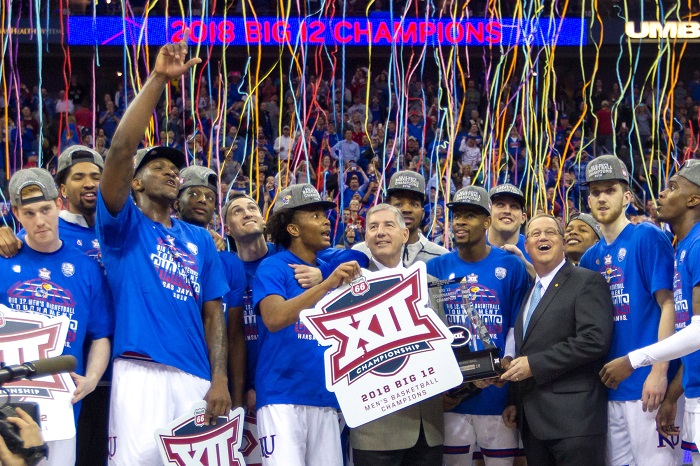 It was the afternoon of Wednesday, March 11th, 2020. I purchased tickets to the first session of the Big 12 Tournament for myself, my son, and my “Little Brother” Javion. I volunteer for Big Brothers and Big Sisters of Kansas City and thought the Big 12 Tournament would be a great opportunity for Javion to experience his first live sporting event. Rumors started circulating during the day that the event may be canceled because of COVID-19 concerns. I remember refreshing my Facebook and Twitter feeds for news on whether or not they were going to play the games. From what I remember, they didn’t officially announce the tournament was still on until very late in the afternoon. Once they made the official announcement, I jumped in the car and picked up Javion, and met my son downtown at the venue.

Little did we know at the time that the game between Kansas State and TCU would be the last sporting event to be completed before most of the country shut down because of COVID. All of the conference tournaments were canceled the next day and the NCAA Tournament followed shortly thereafter. What a depressing time for those of us who look forward to March Madness every year. It’s hard to believe it’s been a year since COVID changed all of our lives. College sports fans have been fortunate that both the college football and college basketball seasons have been played this academic year and I’m looking forward to having a full Big 12 Tournament played followed by a full NCAA tournament.

Baylor is the heavy favorite to win the Big 12 Tournament this year. Kansas or Iowa State has won the last seven Big 12 Tournaments, with Iowa State winning four and Kansas winning three. I think it’s safe to say Iowa State is not likely to win this year’s tournament. Kansas enters as the two seed so they’ve got a legitimate shot, especially since they just beat number one seed Baylor by 13 points a week ago Saturday, on February 27th.

Here’s how I see this year’s Big 12 tournament playing out.

Oklahoma enters the tournament on a four-game losing streak, but Iowa State is the worst Big 12 basketball team I’ve seen in a long time, if not ever. Oklahoma should take care of business and move on to the next round.

No. 4 West Virginia vs. No. 5 Oklahoma State

A short-handed Oklahoma State team beat West Virginia by five points on Saturday. Cade Cunningham did not play but is expected to play in the game on Thursday. Who knows what might happen in this one, but I lean toward thinking Oklahoma State will get the victory.

No. 1 Baylor vs. TCU/Kansas State winner

Baylor looked like world-beaters on Sunday against Texas Tech and they appear to be back up to speed going into the Big 12 and NCAA tournaments. I think they will roll either TCU or Kansas State.

No. 2 Kansas vs. Oklahoma/Iowa State winner

Kansas has been playing very well as of late, so I think they will handle Oklahoma or Iowa State pretty easily.

Texas has won six of their last eight games entering the tournament and Texas Tech has won three of their last four, including a 68-59 victory against Texas on February 27th. The Red Raiders also beat the Longhorns by two points earlier in the season. I’m going to go with Texas Tech in a close game.

I’ve got Oklahoma State beating West Virginia, but even if West Virginia wins that game I don’t think either team is going to beat Baylor. Baylor moves on to the championship game.

Kansas swept the season series against Texas Tech, so the match-up favors them. If Kansas ends up playing Texas it might be a different story since Texas beat Kansas twice during the regular season. Kansas comes into the tournament winning seven of their last eight games, the only loss being an overtime loss to Texas on February 23rd. The most likely team from the bottom half of the bracket to move onto the championship is Kansas, but I believe Kansas, Texas, and Texas Tech all have a shot.

I don’t see any way that Baylor loses in this tournament. They are playing at a very high level again. Texas Tech played a pretty good game on Sunday and Baylor still beat them by 15. Kansas played and beat Baylor recently, but I think they caught them at the right time after a pretty long layoff. If anyone is going to beat Baylor I believe it will be Kansas, but I think Baylor is going to win this tournament and I might pick them to win the NCAA tournament as well. Thank God March Madness is back!

Les Miles is Gone, But Jeff Long Should Not be Far Behind
Who Should Kansas Football Hire to Replace Les Miles?
To Top