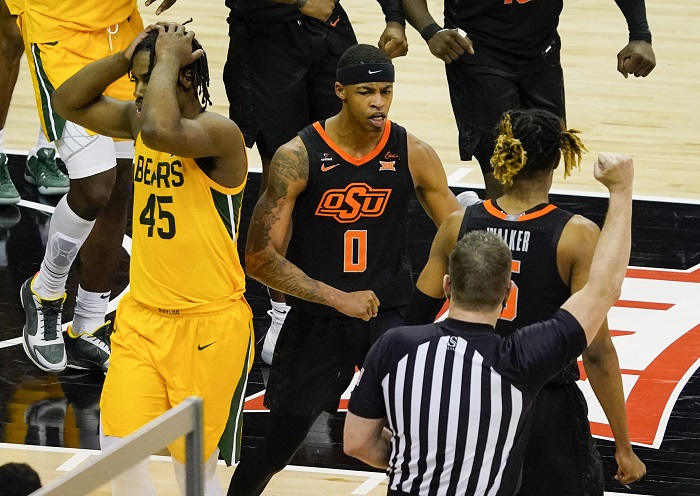 1. THE BEAST FROM STILLWATER

Regardless of what happens the rest of the Big 12 Tournament — meaning whether or not the Oklahoma State Cowboys win the Big 12 Tournament — every team headed for the NCAA tournament is probably hoping the Cowboys don’t end up in its bracket. Right now the Cowboys look like one of the hottest teams in the country. Yes, they have the presumptive No. 1 overall pick in the NBA Draft in Cade Cunningham. But, and I’ve made this point several times the past few weeks, this young team has grown in leaps and bounds the last month. Avery Anderson III is a star in the making, Isaac Likekele looks healthy, and this Cowboys team has at least eight players that can impact the game. Plus, head coach Mike Boynton Jr.’s inclusion of a match-up zone in his overall defensive scheme is discombobulating opponents and the biggest coaching move of the tournament. Look what it did against both West Virginia and Baylor? Sure, teams they face in the NCAA Tournament will have tape to scout, but it’s much different facing that type of zone in person. This team looks like a freight train right now, and it looks like that train could end up going all the way to at least the second weekend of the NCAA Tournament.

2. THIS LOSS COULD WORK FOR BAYLOR

Yes, Baylor wanted to win its Big 12 tournament semifinal game with Oklahoma State on Friday night. Yes, the Bears are probably a little down right now. But, this is the perfect time to lose a game like this. Oklahoma State provided potential NCAA Tournament opponents a template on how to beat Baylor. Mix it up on defense. Get in the face of Baylor’s guards. Force them into situations they don’t want to be in. And make them passive on the offensive end (Oklahoma State’s zone helped with that). It was clear in the final few minutes of that game that the Bears simply weren’t sure what to do. But what could help Baylor’s potential opponents in the ‘Big Dance’ could also help Baylor head coach Scott Drew. The Bears have two days in their Kansas City hotel before heading to Indiana for the NCAA Tournament. Drew and his staff have two days to break down this tape, show it to the players, and show them how to combat what Oklahoma State exploited on Friday night. Baylor will remain a No. 1 seed in the NCAA Tournament. This loss might put them on the same side of the bracket as Gonzaga. But I don’t think it’s going to hurt their overall seeding. And it doesn’t dissuade me from considering Baylor a potential final four team. This is a team that received a sound pounding from Kansas and came right back off the mat. I think they’ll do the same in the NCAA Tournament.

Kansas had to bow out of the Big 12 Tournament on Friday after a player tested positive for COVID-19 after Thursday’s game against Oklahoma. That meant, of course, that Texas got an easy advance to the Big 12 Tournament championship game. But, the positive test also has ramifications for Kansas and its future in the NCAA Tournament. During a stand-up on ESPN’s SportsCenter, reporter Holly Rowe explained that the Jayhawks player that tested positive is headed back to Lawrence today and will quarantine. The team will be sequestered in its Kansas City hotel through Sunday, when it leaves for Indiana and the NCAA Tournament bubble. Self gave the team the day off on Friday, but they will practice Saturday and Sunday. Self told Rowe that between social distance on the team bus, team meals, the bench, and the chips that players are required to wear for contact tracing purposes, that he feels the team is in good shape to play in the NCAA Tournament. The Jayhawks have until Tuesday afternoon to get right, in terms of number of negative COVID tests, before they can take the court for the NCAA Tournament. Additionally, Self believes the David McCormack and Tristan Enaruna will be able to play in the NCAA Tournament.

What we’re NOT talking about is whether this will impact Oklahoma. The player in question played on Thursday night against the Sooners, and while there are no reports of player-to-player passing of the virus during a game, it can’t be ruled out. The Sooners are undergoing the same rigorous testing as the Jayhawks, and are remaining in Kansas City this weekend before leaving for the NCAA Tournament.

Only time will tell. But this is the way of the COVID era in college basketball.