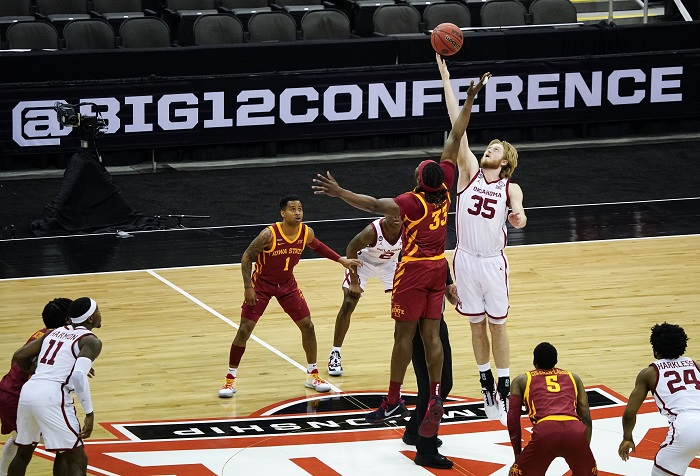 In this Oklahoma Sooners 2020-21 Basketball Season in Review, we examine what went right and what went wrong for the Sooners as they exit the NCAA Tournament.

Note: NCAA rules allow all players to trigger an extra year of eligibility for the 2021-22 season due to COVID-19. These seniors have the choice to return based on that rule.

Any NBA Bound?: Manek and Reaves have the talent. But they’ll have to fight for their chance and likely accept doing it the hard way, through a summer league or a training camp invite. And those were hard to come by in a pre-COVID-19 world last year. Kuath likely isn’t NBA bound, but he told reporters who cover the Sooners that he intends to turn pro after this season.

Who’s Back and Who’s New?

Any One-and-dones or early entries?: De’Vion Harmon announced on March 26 that he was entering the NBA Draft. That doesn’t instantly end his college career, unless he hires an agent.

Any transfers: No Sooners have announced an early entry into the transfer portal.

The player(s) you don’t know about: Rick Issanza was a redshirt in 2019-20 and he played just five games this season, as a result of so many quality players being in front of him. Should the roster turn over, the 7-foot-1 — yes, 7-foot-1 — redshirt sophomore should get a chance to get some playing time and earn a spot in the rotation. His height alone makes him an intriguing option in the Big 12, where so few 7-footers exist.

Noland is a Top 125 national recruit, while Cortes is the No. 3 recruit in Oklahoma. They’ll add depth to a position where they may need help next season.

You have to give Lon Kruger credit. No matter how much talent he has or doesn’t have, he finds a way to put a winning team on the court. With Oklahoma, we knew that Manek, Reaves, and Harmon would give them a good trio to work with. As the season went on, we saw them get meaningful contributions from Gibson and Williams. Hill started to grow into a player they could rely on. But the real find was Harkless, who became eligible in mid-December after the NCAA decided to offer all transfers a blanket waiver to play this season. Harkless became their defensive stopper, the Sooners’ top rebounding guard, and as the season went on he became more of an offensive threat. By the end of January, the Sooners had become the third team in the AP Poll era to finish off four Top 10 teams in a single month. By March, they were sliding out of the AP Top 25. Such are the vagaries of playing in the ultra-competitive Big 12. The Sooners were still good enough to be a higher seed in the NCAA Tournament, beat a solid Missouri squad, and then gave Gonzaga one if the Bulldogs’ stiffer tests this season. Turns out, Kruger got about as much out of this team as he could. But the question of whether the Sooners could have tested Gonzaga further had they had Harmon (out due to COVID-19) will linger for a bit.

After the season head coach Lon Kruger announced his retirement. It’s well earned. But it now puts the Sooners into coaching search mode, right as four seniors have to decide whether they want to trigger their additional year of eligibility. If I were all four seniors, I would come back. Kuath has made it clear he intends to pursue a pro career, so the Sooners will lose his rim protection. Manek and Reaves could end up owning parts of the OU record book as the result of an additional year. Williams would be a valuable bench player. With those three back, the Sooners would be a highly competitive team in the Big 12, but their ceiling might not be any higher than it is right now. The player with the most room to grow, and the player they can become the Sooners’ true star, is Harmon. His game grew in leaps during his sophomore campaign, and he’s an All-Big 12 First Team pick in the making. With Harmon submitting his name to the NBA, that adds a wrinkle. He may just be seeking a report card and could come back next season. But, if Harmon chooses to pursue the NBA, and those remaining seniors leave, then the new head coach has a full rebuild ahead of him. Another wrinkle to watch is whether any of the underclassmen decide to transfer in the wake of Kruger’s retirement. Right now, Kruger’s replacement has developing players like Hill, forward Victor Iwuakor, guard Trey Phipps, forward Anyand Garang, guard Josh O’Garro and Issanza going into next season.