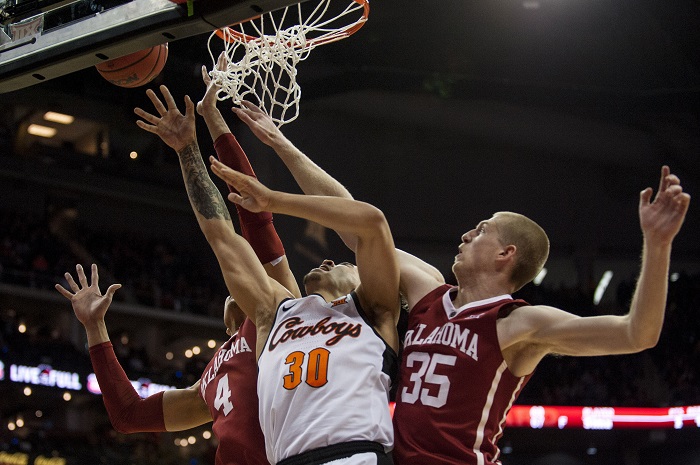 Oklahoma senior forward Brady Manek has submitted his name to the transfer portal, according to a report from 247Sports.com’s Brandon Drumm.

Manek could have returned to Oklahoma for the 2021-22 season because the NCAA gave all players an additional year of eligibility to ‘winter sport student-athletes who compete during 2020-21 in Division I.’

While submitted his name to the transfer portal doesn’t necessarily end Manek’s Sooners career, as he can withdraw his name, it’s just the latest move by Sooners players in the wake of the retirement of head coach Lon Kruger. Manek has one year of eligibility remaining.

Manek played four years at Oklahoma, having joined the program as a true freshman before the 2017-18 season, along with current Atlanta Hawks star Trae Young. Manek made three trips to the NCAA Tournament, including this seasons’ trip to the second round, where the Sooners lost to Gonzaga.

Manek had his struggles last season, as he missed a couple of games due to COVID-19 protocols. But he came on at the end of the regular season and in the postseason. He averaged 10.8 points and 5.0 rebounds per game this season.

For his Oklahoma career, Manek averaged 12.0 points and 5.6 rebounds per game. He also earned All-Big 12 honors as a third-team selection for the 2019-20 season and an honorable mention for the 2018-19 season.

While every Division I player had the option of the additional year of eligibility, Manek faced a pressing decision because, as a senior, he faced the completion of his college eligibility.

Since the retirement of Kruger, the Sooners have seen guard Austin Reaves and guard De’Vion Harmon submit their names for the NBA Draft, Kur Kuath pass on taking his additional year of eligibility, and forward Victor Iwuakor submit his name to the transfer portal.

Beard on Texas: ‘The Expectations Don’t Scare Me’
Oklahoma Sooners Hire Porter Moser As Next Basketball Coach
To Top