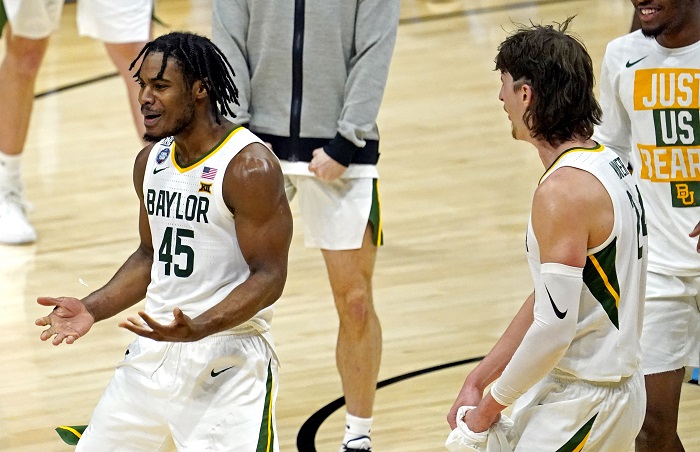 Three Thoughts on the Baylor Bears’ win over the Houston Cougars

Here are three thoughts following the Baylor Bears victory over the Houston Cougars in the Final Four of the 2021 NCAA Tournament.

JARED BUTLER IS BACK

His performance in the first half was akin to what we had seen from him before the COVID-19 pause. Butler scored 17 points. He shot 6-of-8 from the floor. He was 4-of-5 from the 3-point line. He made one free throw. He grabbed four rebounds, two assists, and a steal. It was all part of a huge first half for the Bears (see our second thought for more on that). For a little perspective, Butler hadn’t scored 17 or more points since the Bears’ 74-68 win over Kansas State in the Big 12 Tournament on March 11. He also hadn’t hit four 3-pointers in a GAME since the Bears faced Oklahoma State on March 4. And, perhaps, that’s more important. He had been 11-of-40 from the 3-point line in his last seven games.

Butler actually didn’t score in the second half. Davion Mitchell took over, finishing with a double-double, scoring 12 points and dishing out 11 assists.

But, this Butler? The Butler that played in the first half? That’s the Butler the Bears will need the entire game on Monday night.

Baylor just destroyed Houston by halftime, 45-20. Everything was clicking. After 20 minutes, the Bears were shooting 55 percent from the floor (they finished above 50 percent for the game), while Houston was shooting 24 percent (the Cougars pushed its back to 37 percent by game’s end). Davion Mitchell had nine points and seven assists. Just to illustrate Baylor’s incredible efficiency, the Bears made 16 field goals in the first half and had 12 assists. They converted nearly everything from the floor in those first 20 minutes. Baylor built that lead methodically, with a 7-0 run to make it 13-8 at the under-16 timeout. By the 10-minute mark Baylor was up 22-11 and shooting a 60-60 hash. Both Matthew Mayer (12 points) and Jonathan Tchamwa Tchatchoua (11 points) had five points each off the bench by that point. Houston was down 11 and its biggest NCAA Tournament deficit to that point had been 10 points. By the 5:08 mark the Bears were up 33-17 and were on a 9-0 run. By halftime the Bears were up 45-20, finished off an 18-3 run, and had buried the Cougars into a hole from which they could not crawl out of. Baylor did it with that offensive efficiency we’ve seen most of this season.

Baylor was actually a good matchup for Houston. In some ways, the Bears and Cougars are mirror images of each other. They rely on speed, guards and somewhat undersized big men. And going into the game the focus was on Houston guard Quentin Grimes, who was averaging 18 points per game. The Kansas transfer had a great season for the Cougars.

That ended unceremoniously on Saturday. The Bears had a design to slow down Grimes and they did, holding to an 0-for-4 clip from the field in the first half and not scoring a single point. At times, it looked like Baylor guard Mark Vital drew that assignment. At others, it looked like Davion Mitchell. And both were up for the Naismith Defensive Player of the Year, which Mitchell won.

But it wasn’t just limiting Grimes, who finished with 13 points. The rest of the Cougars, save Marcus Sasser, were awful in the first half as the Cougars shot 24 percent. Sasser was their saving grace. He scored 17 of the Cougars’ 20 points, and the Bears seemed content with that as long as Grimes didn’t hurt them. Sasser finished with 20 points.

Houston played better in the second half, cutting the lead to 20 points at the under 16. But with such a big hole to claw out of, the Cougars just couldn’t do it. And they could blame the Baylor defense for that, especially in the first half.