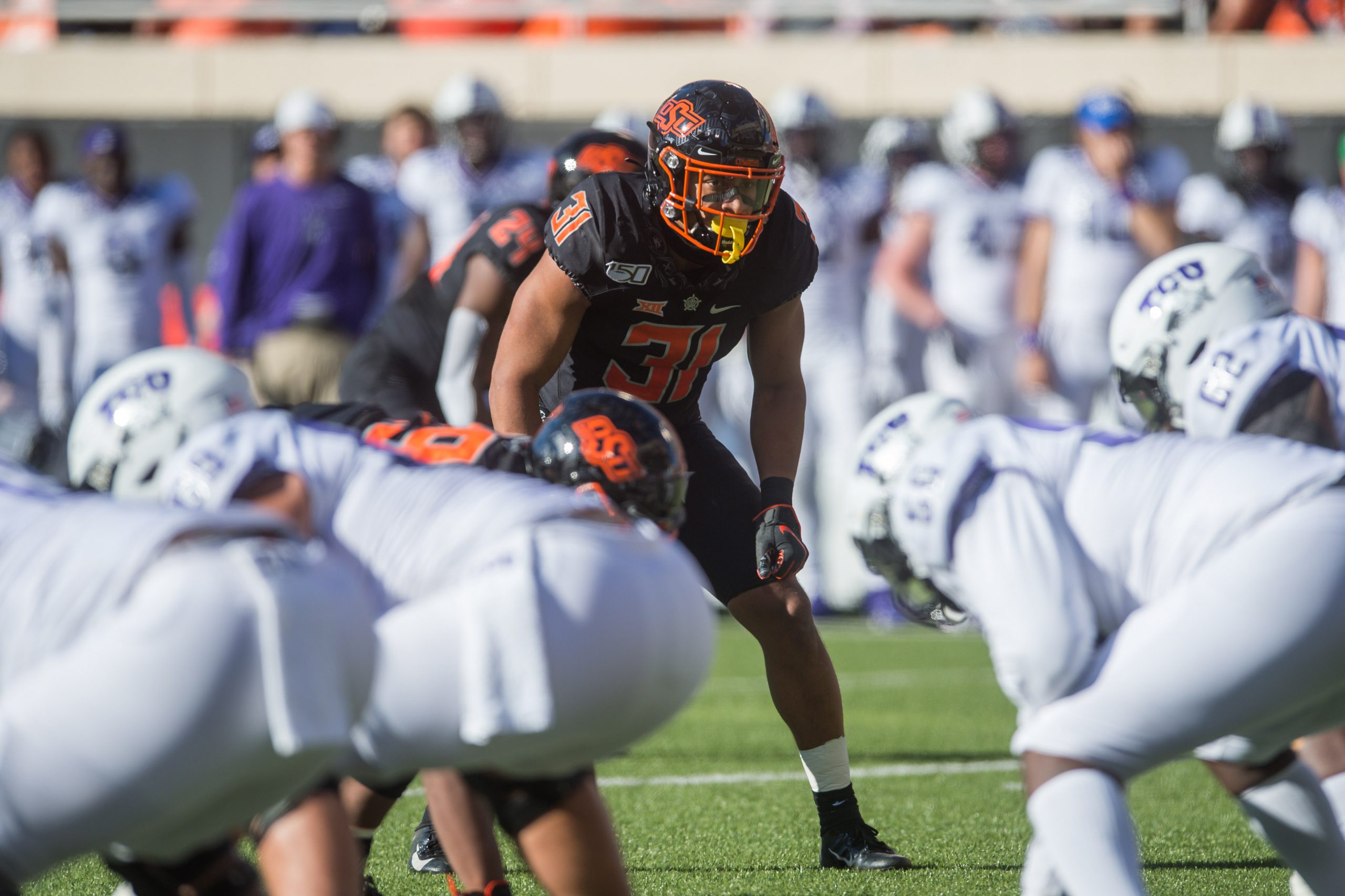 The Big 12 surprised a lot of people in 2020, but not in its typical high-scoring, offense-heavy ways that we’ve been used to in recent years.

Some of the best defense in the country was played in the Big 12, as four of its teams ranked in the top 20 for the DFEI defensive ratings, which calculates a team’s defensive ranking based on per-possession scoring advantage each team’s defense would be expected to have on a neutral field against an average offense.

Oklahoma State, in particular, ranked No. 14 in the DFEI, the highest Big 12 team behind Oklahoma. The Cowboys surprised many when it came to stopping Big 12 offenses, holding their opponents to 23.5 points per game on average after averaging 26.7 in 2019 and 32.5 in 2018.

For the first time in years, the Cowboys were exciting to watch on defense. Third-year defensive coordinator Jim Knowles instilled a physical and disciplined mentality on his players and it paid dividends in 2020. Oklahoma State flew around on defense and rarely seemed to miss tackles. Defensive backs played consistently solid in coverage, linebackers ran to the ball and the defensive line got so much push, putting constant pressure in the backfield.

Big pieces for sure, and huge reasons why OSU’s defense was so lethal last season. Their presences will be missed, but I think Knowles’ group will be even better this year despite the holes left. Impact players such as Malcolm Rodriguez, Kolby Harvell-Peel, Tre Sterling and Christian Holmes all opted to return after COVID-19 resulted in a free eligibility season for all players. This along with the embarrassment of riches the Cowboys have in terms of experience and playing time could make for an even more dangerous defense to watch for in 2021.

Let’s start with the defensive line. As mentioned before, Cam Murray is off the league so the rotation in the trenches won’t look too much different. All of the guys on the two-deep and most of the three-deep played considerable snaps last season. The defensive ends include guys like Trace Ford, Brock Martin, Tyren Irby, Tyler Lacy and Kody Walterscheid, who will all vye for playing time. In the defensive tackle spots, Israel Antwine, Brendon Evers, Sione Asi, Collin Clay, Jayden Jernigan and Samuela Tuihalamaka will all factor into the rotation. Incoming freshmen Aden Kelly and Nathan Latu could also see some snaps.

The linebacking core loses Ogbongbemiga, but I believe there are multiple players that can pick up the slack from last season’s leading tackler. Guys like Devin Harper or Na’Drian Dizadare proved they were reliable in shooting gaps as well as dropping into coverage. Rodriguez returns after a stellar 73-tackle season that was good for second on the team. JUCO transfer Lamont Bishop brings size and strength to an already physical defense, and look for guys like Mason Cobb and Kamryn Farrar to find their way into the rotation from time to time. True freshman Collin Oliver will attempt to carry on the Edmond Sante Fe pipeline as well, coming in as one of the Pokes’ top recruits in the 2021 class.

Lastly, the corners and safeties groups carry an abundance of skill and veteran energy. Christian Holmes returns after playing opposite of corner Rodarius Williams, as well as Jarrick Bernard-Converse, Thomas Harper and Korie Black. Young guys like Jabbar Muhammad and Demarco Jones also saw reps late in games, and will look to build depth at the corner position. At safety, the dynamic duo of Kolby Harvell-Peel and Tre Sterling reunite to form one of the best safety tandems in the country. Tanner McCalister plays the ‘five’ in Knowles’ 4-2-5 defense, where he’ll be looking for another productive year. Jason Taylor II will probably be the immediate backup, followed by Sean Michael Flanagan and Kanion Williams. The Cowboys’ coaching staff got busy on the recruiting trail for DB’s, hauling in No. 1 player in the state of Oklahoma and fifth best safety in the country, Kendal Daniels.

Because of this and all of the depth and experience the Cowboys have on D, this could be another banner year for Oklahoma State defense. Each defensive group loses just one key contributor from last year and adds about three more, so how deep each position can be will be the determining factor to OSU’s defensive success.