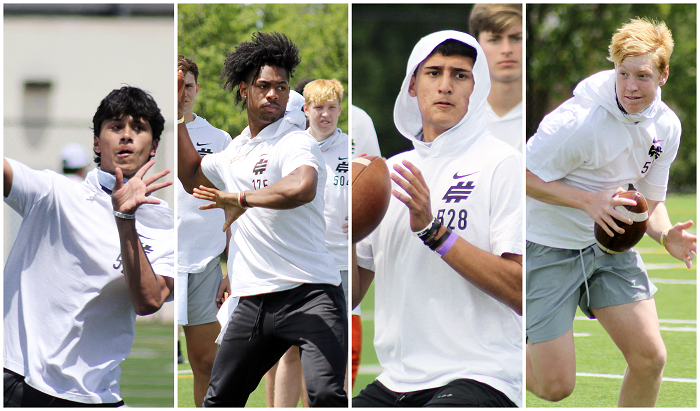 It has been nearly a year and a half since I have last attended a sporting event but it was nice to make the trip up to DFW for an event like the Elite 11. It gives us a chance to see these top rated quarterbacks up close and gives us an opportunity to chat with them afterwards. There were a total of four quarterbacks on the Big 12 radar there and here is how they fared out in my opinion.

Garrett is an excellent quarterback and the Cowboys should feel lucky to have a guy like him on board. Despite being only a three-star prospect by both Rivals and 247, I think Garrett should be considered a high three-star type of player. He was good in just about every drill I saw and if you ask me, he should have gotten an invite to the Elite 11 finals. I truly felt like he was the third best quarterback there behind only Quinn Ewers (Ohio State Commit) and Cade Klubnik (Clemson Commit).

Richard was put into the “A” group on Sunday afternoon and I thought he was able to hold his own. He is a tall kid at 6’6 and stood out due to his size alone. He still has a little work to do in the passing game but overall, I came away impressed with his play. I know these camps aren’t able to really showcase what some of these quarterbacks can due in the run game which is something Richard is able to do. He is a Power Five level quarterback in my book and Kansas State should be pursuing him as much as they can.

Bo currently holds an Oklahoma State offer and I think he has some good upside. I did not get to see him a ton but from what I did see, he was consistent. I really like his throwing motion as he has go a quick release. Keep in mind, he is a 2023 quarterback and I think as time goes on, I think his offer list will continue to get bigger.

Cedric currently has a Kansas offer and I am sure current Kansas interim coach Emmett Jones has his hand in this recruitment due to his DFW ties. Cedric is an athletic guy who is listed as a dual threat quarterback. While it is difficult to display that in a camp setting, he is able to move around well. He still needs some work throwing on the run and in the passing game overall but I think he also will be getting more looks during his junior season this year. The ceiling is high!

Around a month ago, a public dispute between Nick Saban and Jimbo Fisher had the sports world captivated as the “Czar of...