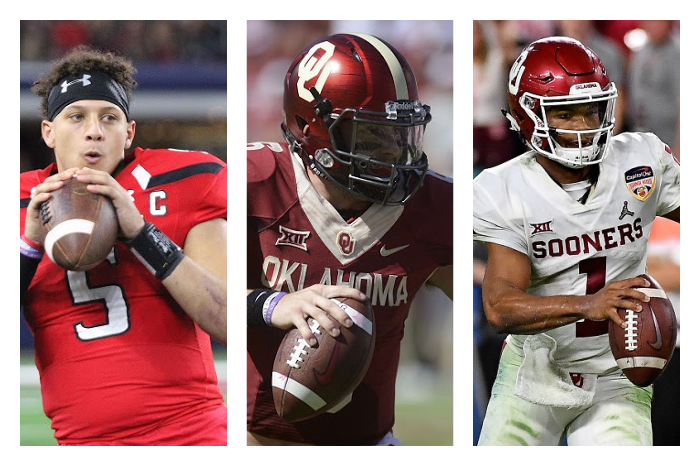 The 2021 NFL draft kicks off on Thursday from Cleveland, Ohio with every team looking for that perfect player. The one who can turn around a bad franchise or take a good one to the next level. The Big 12 Conference has had 10 first-round draft picks over the last four years. Let’s take a look at where these players landed and how each one rates on a scale from boom to bust.

Patrick Mahomes has exploded onto the NFL scene with three straight AFC title game appearances, two Super Bowls trips, a Super Bowl win, and countless mind-boggling throws. He already holds multiple NFL passing records, including fastest to 10,000 career passing yards (34 games) and most consecutive games (8) with 300 or more passing yards. Mahomes also became the second player to throw for at least 5,000 yards and 50 touchdowns in a season. Being a backup during his first season, a rare option as a first-round quarterback, helped with overall development and the transition from college. A record-setting 10-year, $503 million contract extension last offseason simply reinforced Mahomes’ impact on the league. Expect more wins, passing records and championships from a signal-caller who has a clear desire to be the best.

Rating: To Be Determined

After guiding Cleveland to six wins in 2018, Baker Mayfield filmed a Progressive insurance commercial series. The commercials gained popularity the following season while Mayfield struggled and faced questions about his work ethic. Not a good look. However, Cleveland finished the 2020 season at 11-5 under Mayfield’s guidance and earned its first playoff victory since 1994. Mayfield also threw for a career-high 4,030 yards and a career-low nine interceptions. The Browns extended his contract by one year, which means they want more consistent results before making a long-term commitment. Things like a career 62% completion rate, with a high of 63.8% during 2018, need improvement to warrant a multi-year contract extension. Mayfield must prove 2020 was not a fluke. Otherwise, he will become another quarterback whose career ended in Cleveland.

Kyler Murray may not have a playoff appearance yet, but that’s simply the next step. Murray transformed Arizona’s offense while learning under a head coach who had no previous NFL experience. A Rookie of the Year performance in 2019 established the standard as Murray set career-highs for passing yards (3,971), touchdowns (26) and completion percentage (67.2) last year. Spending more time with a young receiving group and All-Pro wide receiver De’Andre Hopkins should keep those numbers high. Murray’s 819 rushing yards also ranked second on the team and No. 17 in the league. A career 13-18-1 record raises some concerns, but Murray and the Cardinals are trending upward.

Rating: To be Determined

Marquise Brown has become one of quarterback Lamar Jackson’s favorite targets. Brown caught 53 passes for 710 yards and seven touchdowns while missing two games in 2019. Only tight end Mark Andrews had more receptions and receiving yards. Those numbers jumped up when Brown played 18 games last season. He had a team-high 965 yards on 69 receptions and another eight touchdowns. Despite the increase, Brown’s regular season yardage (769) ranked No. 42 among wide receivers, and he had less than 40 yards in seven games. Brown fits well with Baltimore but needs more consistent numbers to be considered an elite receiver.

L.J. Collier recorded 22 tackles and three sacks last season. Combine that with an injury-plagued rookie year that resulted in three tackles, it’s easy to write off Collier. He showed promise and gave the Seahawks defensive line a spark throughout 2020. A goal-line stop against New England on the final play during a week 2 win stands out as the biggest moment. One memorable moment every 16 games will not be enough moving forward, though. Increased production and continued energy can transform Collier from a borderline bust into a solid player.

In just one season, CeeDee Lamb became a vital part of Dallas’ offensive identity. Lamb finished second on the team, behind Amari Cooper, with 935 receiving yards and five touchdowns on 74 receptions. He also carried the ball nine times for 79 yards and a touchdown and returned 24 punts. Multiple Cowboys were injured during the season, most notably quarterback Dak Prescott in week 5, which forced Lamb to adapt and learn on the fly. He adjusted well and improved each game. If Lamb can build on 2020, a Pro Bowl-caliber year seems inevitable.

Multiple things went wrong during Jalen Reagor’s rookie season. A shoulder injury in training camp limited his snap count initially and then a thumb injury kept Reagor out of five games. When he did play, the consistent down field threat Philadelphia desperately needed never emerged. Reagor could be that guy, but it will take a lot more than 31 catches for 396 yards and a touchdown. A new coach and starting quarterback might help him hit the reset button, but that must happen quickly. A bad second year will solidify Reagor as a bust.

Los Angeles moved up in the 2020 draft before selecting Kenneth Murray, putting a little more pressure on the Oklahoma product. Murray accepted the challenge and led the team with 107 tackles, including 68 solo tackles. He recorded a season-high 14 tackles and a sack against New England in week 13. The Chargers used Murray on 93% of defensive snaps and potentially found a defensive leader. Given time, the speedy middle linebacker could develop into a very dominant player.

Jordyn Brooks needed time to show Seattle it made the right first-round choice. Early in the season, an injury sidelined Brooks for a couple games which prevented him from grabbing a starting linebacker spot. He returned without much fanfare but made every moment count. Brooks only played 32% of available snaps over 12 games. Still, he recorded 65 tackles and two pass deflections. The Seahawks will find Brooks more opportunities, either as a starter or with specific packages. He has a bright future and should post stronger numbers moving forward.

Rating: To Be Determined/Bright Future

Jeff Gladney had an up and down rookie season. That’s almost expected when learning how to play cornerback at the NFL level. Gladney racked up 81 tackles, including seven for loss, had three pass breakups and a forced fumble over 16 games. Not bad numbers until you notice opposing quarterbacks had a 118.1 rating when throwing toward Gladney. Again, rookie cornerbacks rarely come in and dominate. Gladney started 15 games and showed promise at different moments. Turning that promise into something more will depend on Gladney’s desire and willingness to nurture the talent and learn from a hard first season.