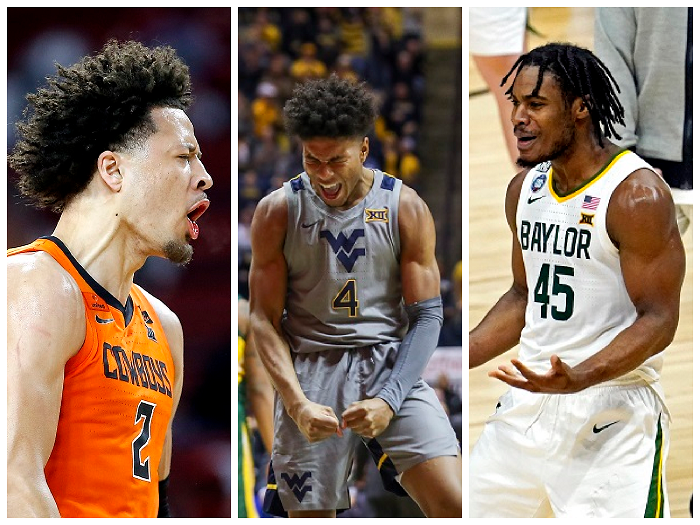 After all the NFL Draft coverage these past few weeks, it’s time to go from one draft excitement to another. The NBA will hold its annual draft July 29 during the offseason, and fans of Big 12 basketball might want to mark their calendars.

The Big 12 will be represented well at this year’s draft, as nine players from the conference are slated to be chosen, as well as 13 more who have declared for the draft but aren’t currently picked to land in the top 60. Some of these guys testing the waters could still decide to return to their respective programs given they are unsatisfied with their draft grade, like Oklahoma State guard Avery Anderson.

With just over 71 days until 60 new rookies make their way to the league, I thought I’d take a look at where each Big 12 player who submitted their name for the draft is being picked to be selected in the latest 2021 mock draft by NBADraft.net. Of course, there are countless mock drafts conducted by numerous outlets, and none of these predictions amount to anything substantial until the draft lottery is held on June 22, but for now we have a smidge of an idea of where each team will be picking and their needs.

The consensus No. 1 pick among experts, Cunningham will go first overall to whoever lands the top pick in the lottery, with Houston having the best odds at the conclusion of the regular season. The Rockets won an abysmal 16 games this season after dealing James Harden to Brooklyn, and will be looking for a star player like Cunningham to build around. Many teams have similar odds to land the former Cowboy, however, including the Detroit Pistons, Oklahoma City Thunder and Cleveland Cavaliers.

The explosive brother of Jazz star Donovan Mitchell, this former Baylor Bear has peaked at some mock drafts I’ve seen at the seven or eight spot. Wherever he lands, that organization is getting a straight up baller. The Pelicans will be looking for a facilitating guard to help compliment Zion Williamson and Brandon Ingram, and Mitchell is the perfect choice if they can get him with the tenth pick.

It is rumored that Indiana is looking to move former fellow Texas Longhorn center Myles Turner during the offseason, so the Pacers will most definitely be looking to fill the position come draft night. Jones is a strong and agile big man who runs the pick and roll well. He’ll have to put on some weight to compete with NBA centers, currently sitting at 220 pounds, but that shouldn’t be an issue.

McBride was the spark plug for the Mountaineers last season, always giving 110% on both ends of the floor no matter the score. He reminds me of a Marcus Smart-type player, and I think any NBA team would be happy with a guy like that. The Knicks would be filling a less-than-stellar guard spot that is headlined by Elfrid Payton and Reggie Bullock. Add McBride to the promising young squad and perhaps New York can again exceed expectations in 2021-2022.

The leading scorer on the National Championship Baylor Bears team, Butler did it all for coach Scott Drew during his time in Waco. Currently slated as a late first rounder, I could honestly see him climbing the draft ladder as the weeks go on. Houston is again expected to go with a guard from the Big 12 as they look to build around whoever their lottery selection will be, and Butler is one of the best in the draft at that position.

A project player for sure, Brown made up a scary Longhorn paint presence alongside teammates Kai Jones and Jericho Sims. Though he struggled to compose himself in some games and yearned for playing time, his potential is through the roof with how athletic and long he is, sort of resembling a rookie Giannis Antetokounmpo. Philly will gladly take Brown to add some bench depth to an already solid team.

Nembhard was a bright spot in an otherwise disappointing year for the Horned Frogs, leading the team in scoring with 15.7. He finds himself near the top of the second round in this mock draft, with him going to Sacramento, who is looking to build upon their backcourt duo of De’Aaron Fox and Buddy Hield, as well as former Iowa State Cyclone Tyrese Haliburton.

Sims conducted the frontcourt last season in Austin, serving as a big body who could also step out and knock down the mid range jumper. A key reason the Longhorns won the Big 12 Tournament, the four-year senior would add some depth to a Pelicans team that is searching for a complimentary big man for their stars.

The 2019-2020 Big 12 defensive player of the year cemented his legacy at KU through four years of consistent defensive output and memorable moments. Garrett will hopefully hear his name called in July as the mock says, going near the end of the draft to the Thunder. OKC will be pretty guard-heavy next season, so adding Garrett would serve to fill out the bench or perhaps to send to the G-League for development.

Here is the list of players who have submitted their name to the NBA Draft but so far aren’t expected to be selected: