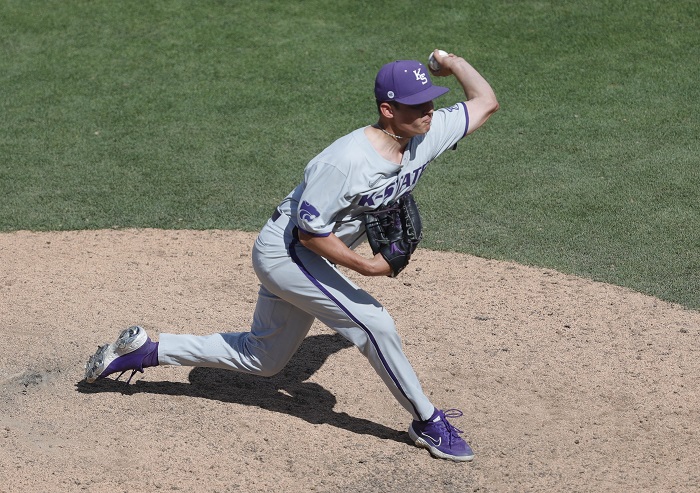 It was a busy day at Oklahoma City’s Bricktown Ballpark for the Big 12 Conference Baseball Tournament. We had a full slate of games on Friday after having half of the schedule on Thursday cancelled due to bad weather in the area. But don’t worry because Friday picked up right where we left off on Thursday as two more teams were sent home packing.

As we continue to make our way through the tourney, I have a few thoughts from the third day of Big 12 baseball action. Here were the final scores from Friday’s games.

Coming into this tournament, the Horned Frogs had lost six out of their final nine regular season games. However, their momentum has seemed to change in the right direction after getting a good win against Kansas State in the first round before beating a solid Texas Tech team on Friday. Thanks to a couple Hunter Wolfe RBI’s and a Tech error, TCU led Tech 4-0 after just three innings. The Red Raiders would get on the board with a Nate Rombach two run blast, but TCU would add a run in the seventh inning before adding two more insurance runs in the eighth thanks to more mistakes by the Red Raiders.

With the win, TCU is in one of the driver seats for the tournament as they will have to be beaten in back-to-back tries if someone needs to send them home. The Horned Frogs will face Kansas State on Saturday morning at 9 a.m. and if needed will play another game at 4:00 p.m. if they can’t take care of business in the morning.

Once again, the Kansas State bats stayed red hot in OKC. Thanks to Cameron Thompson and Dylan Phillips, the Cats got off to a quick 2-0 lead in the top of the third inning. However, they weren’t done yet as Kansas State had a monster fourth inning scoring five runs which was highlighted by a Cameron Thompson double that drove in three runs. Texas Tech would put up two runs in the fourth inning but then it became a pitching game between Kanas State’s Tyler Eckberg and a few Tech pitchers. Neither team would score a run after the fourth inning.

With the loss, Texas Tech was sent home and while it may not mean a ton for Texas Tech in terms of hosting a regional, this was a huge win for Kansas State who notched their fifth top five win this season. The Wildcats still have postseason hopes and will face TCU at 9 a.m. on Saturday and will need to knock off the Horned Frogs twice on Saturday to advance to the championship game on Sunday.

After beating down their in-state rival in Oklahoma on Wednesday, the Cowboys continued their dominance on the diamond with an easy 12-2 run rule victory in just seven innings. Oklahoma State wasted no time scoring as they were able to put up eight runs in just two innings of work. Jake Thompson started with a big RBI before Carson McCusker had an RBI single and a three-run bomb in the second inning. Justin Campbell also had a three-run shot to make it an 8-0 game after two innings. West Virginia’s Alec Burns would get the Mountaineers on the board with a two-run homer in the fourth, but West Virginia was never able to find anymore runs in this game. Oklahoma State pitchers Parker Scott and Bryce Osmond combined for a total of 12 strikeouts and allowed just four hits all game long.

With the win, Oklahoma State advances and will play at 12:30 p.m. on Saturday. If the Cowboys drop that one, then they will play a rematch at 7:30 p.m. in an elimination game.

4. Bounce Back Win for Texas and West Virginia’s Season Ends

After dropping game one of the tournament to West Virginia, Texas had the opportunity to get revenge against the Mountaineers on Friday night as the loser would go home. The game started slow but give credit to West Virginia pitcher Jacob Watters and Texas pitcher Pete Hanson as both guys had at least eight strikeouts in the game.

Thanks to a wild pitch in the third inning, Texas would go up 1-0 but just two innings later, West Virginia would take a 2-1 lead after Matt McCormick drove in two runs in the fifth. The lead wouldn’t last though as Silas Ardoin came up with a big two-run RBI double to give Texas the 3-2 lead. In the seventh inning, Texas pitcher Tanner Witt would take the mound and close the game out for a Texas win.

West Virginia had to win this tournament if they wanted a taste of the postseason and instead, they lost two games on Friday and will be sent packing. As for Texas, they will take on a red-hot Oklahoma State team on Saturday at 12:30 p.m. and will need to beat the Cowboys twice on Saturday to move on.

Here is the full rundown for Saturday’s games.