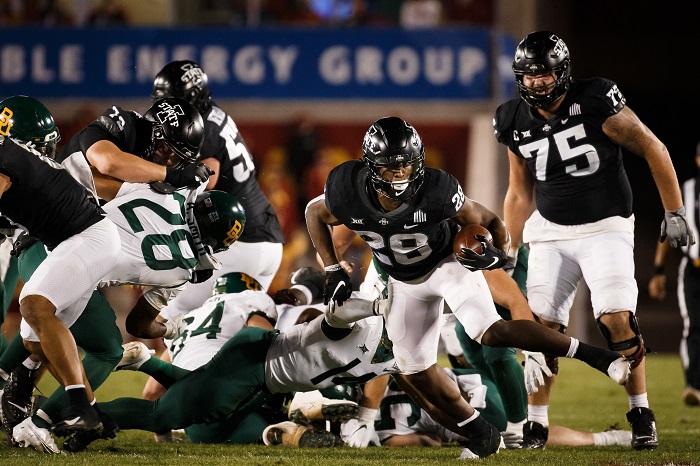 It’s hard to repeat a year like Breece Hall’s from 2020 and translate into a big 2021. Just ask Chuba Hubbard. But Breece Hall if Breece Hall doesn’t live up to his expectations this fall, it won’t be due to a lack of motivation.

And a large part of that motivation appears to be coming from Pro Football Focus.

Less than a month ago, PFF put out its list for Top 5 running backs heading into the 2021 season and Hall was no where to be found.

Two Big 12 running backs, Oklahoma’s Kennedy Brooks and Kansas State’s Deuce Vaughn, did make the list. But not Iowa State’s Breece Hall, who was the nation’s leading rusher in 2020 as he was the only player in college football to rush for over 1,500 yards last season. Plus, the man had 21 rushing touchdowns.

When that tweet came out, Hall responded on Twitter, writing, “Yeah, OK” and adding a “taking notes” emoji.

The latest slight from PFF came on Saturday when they shared their list for the Top 5 Big 12 players in 2021. Also conveniently missing: Breece Hall.

Is it finally Oklahoma’s year? pic.twitter.com/bQl04kQslI

It’s almost like they’re trolling him at this point. And while Hall didn’t directly respond to the tweet, he once again, took notes.

If you follow Twitter closely, you can see that Hall “liked” the tweet. Essentially he bookmarked it as a way to use it as motivation during the offseason and possibly into the fall.

Can you blame him?

By the way, the last thing Big 12 defenses need to deal with is a Breece Hall who is even more motivated than he already was. He’s been feeling this way dating back to January, just days after the season ended.

Hall did not win the Doak Walker Award, given to the nation’s top running back, and he tweeted out at the time. “Trust me & Mark my words. I’m gonna get everything I couldn’t have this season…”

This is not a guy coming back so he can go to a few extra college parties. He’s fired up.