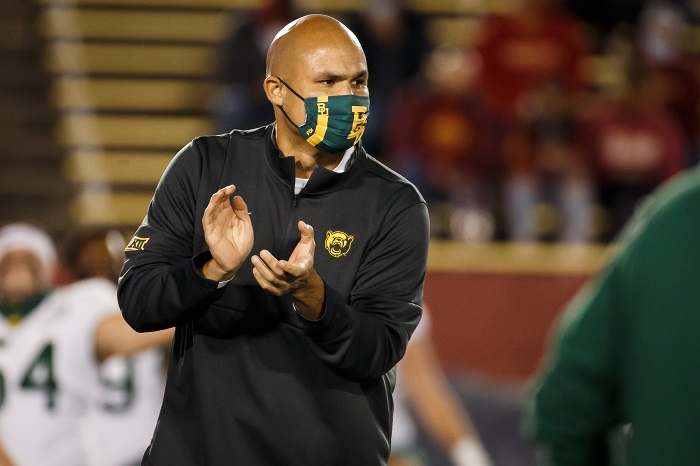 The Baylor Bears 2020 football season didn’t go as planned in Year 1 under Dave Aranda. But it’s a new year, we’ve turned the page and Baylor will be working in new faces as they try to bounce back from a 2-7 season and inch closer towards where the program was in 2019, when it reached the Big 12 Championship Game under former head coach Matt Rhule.

The race appears to be a two-man battle between Jacob Zeno and Gerry Bohanon, although head coach Dave Aranda has said that Blake Shapen is in the mix as well. I still believe it’s just a two-man between Zeno and Bohanon.

Aranda is keeping his cards close to the vest, but recently told 247Sports, “You look at a guy like Gerry and his leadership, his veteran experience and presence. He’s got a really strong arm. When it’s play-action passes, boots and waggles and things out of the pocket, he really shines. There was improvement with Gerry when it comes to the drop-back passing game. When you get the drop-back passing game, the guy that from the start started off really fast was Jacob Zeno with just the anticipation and understanding of defenses and the ball coming out quick and receivers coming out of their breaks and there is the ball. I think his ability to throw the deep ball is also there.”

The other key decision maker here is new OC Jeff Grimes, the former BYU OC, who just developed the No. 2 NFL Draft pick in Zach Wilson. If I were to say today, which player more likely resembles Wilson, it’s Zeno. But this will be a race that will take up much of fall camp. Whoever wins the job, and their level of success, will play a big role in determining if Baylor can have a bounce back season.

This O-line in Waco needs a jolt as it gave up 31 sacks in nine games, the second most in the Big 12 ahead of only Kansas. Baylor was also dead-last in the Big 12 with only 90 rushing yards per game and 2.7 yards per carry.

The Bears do have some veterans up front, led by three-year starting senior left tackle Connor Galvin. Also, there’s fifth-year senior guard Xavier Newman-Johnson (19 starts) and senior guard Khalil Keith has nine starts over the last two years. Don’t overlook Vanderbilt transfer Grant Miller, who started 14 games at center the past two seasons for the SEC program. But despite much of this experience, if it doesn’t develop under the tutelage of Mateos, it may not matter who ends up winning the QB battle, because that cat will be running for his life every Saturday.

For those wondering that this all ties back to the offensive line, that is fair. As we noted above, the Bears averaged only 2.7 yards per carry last season, which was not solely the fault of those carrying the ball, but also the inability for the line to create holes to run through. All-American kick returner Trestan Ebner leads the way, with the 1-2 punch including sophomore Craig “Sqwirl” Williams, who is coming off an injury. Others in the mix include Qualan Jones, Taye McWilliams and Jonah White. Ebner opted to use his free year of eligibility given to him by the NCAA due to COVID-19 and has to lead this unit to a better result in 2021. Jeff Grimes’ system includes a new “wide-zone” running attack, which could help players like Ebner who prefer to find their one cut and use their speed to make big plays. For the offense to have more balance, this group will need to play a big role and find its footing in  a way it never did during the 2020 campaign.