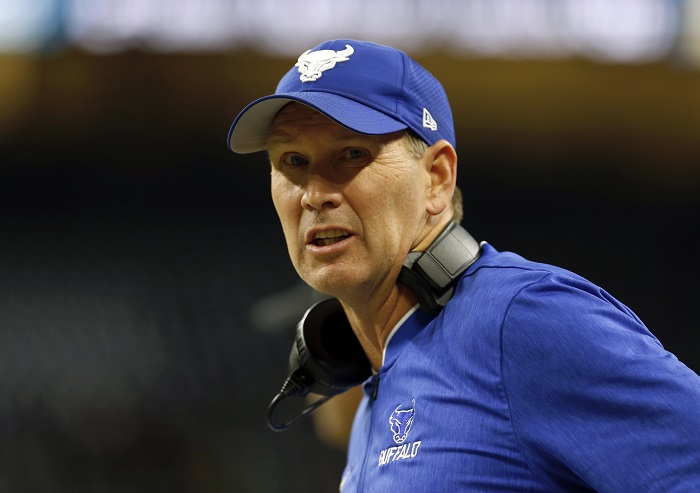 The Memorial Day Weekend was a busy one. We had NBA playoffs going on, Major League baseball, golf, college softball and college baseball was wrapping up conference championships. If you are a sports fan, it was one heck of a weekend that was perfect for couch sitting.

However, while we were all relaxing, new Kansas Head Coach Lance Leipold was busy. This past weekend, the new man in charge got a boat load of talent from his old stomping grounds at Buffalo. On Sunday, three of his former players announced their decision to transfer to Kansas in defensive tackle Eddie Wilson, wide receiver Trevor Wilson and All-MAC center Mike Novitsky.

The party didn’t stop on Sunday either. On Monday, linebacker Rich Miller Jr., defensive tackle Ronald McGee and offensive lineman Michael Ford Jr. announced that they will be heading to Lawrence to play football.

I know that these guys all came from a Group of Five program, but think about it, if these guys can play at that level, then why can’t they play football at Kansas? The Jayhawks need all the help they can get and getting some players in who have had some success and won games on the football field isn’t a bad thing. Hopefully this will all help bring a winning attitude and culture can takeover at a place like Kansas.

The first step for any program to feel like it’s taking that next step is understanding how to win, and maybe more importantly, the process on how to win. No one in the Kansas football program, at least on the roster, has that experience at the collegiate level. They all likely won in some capacity in high school, but doing it in college is a different beast. And no matter how much experience the coaching staff has in winning games, there’s something to said for having a group of guys who have done it at the Group of Five level.

These new faces from Buffalo have done that and while their names won’t be the headliners like a ex-five-star player leaving his SEC program to hit the reset button in the Big 12, in some ways these players provide more value than the guy who’s been buried on the depth chart and last played meaningful football in high school in 2018.

Don’t overlook these moves for Kansas, as Lance Leipold tries to turn around a program that’s been stuck in the mud for well over a decade.