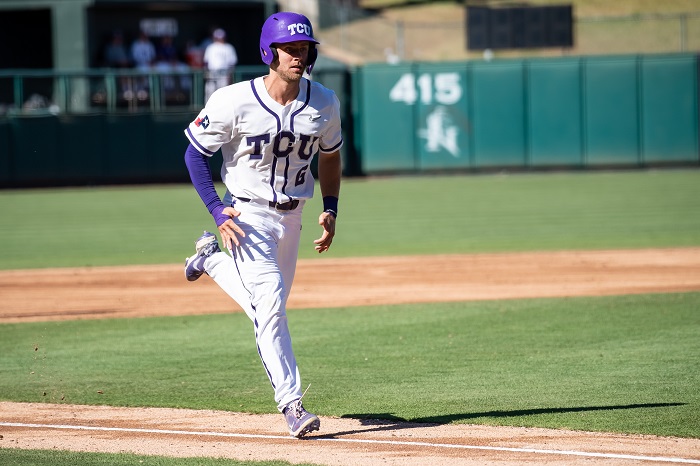 The TCU Horned Frogs continued their NCAA baseball regional with an 8-6 loss to Dallas Baptist on Saturday evening in Fort Worth, Texas. Here are three takeaways from the game as the Horned Frogs prepare for Sunday’s game.

The Horned Frogs appeared to be in control going into the bottom of the seventh. Up 6-2, the Dallas Baptist Patriots needed a spark. And they got it.

The bottom frame became a mess for the Horned Frogs. The Patriots turned an innocuous leadoff walk by Austin Bell into a five-run inning that allowed DBU to take the lead, 7-6. It unfolded like a nightmare for TCU.

After Bell’s walk, River Town reached first on a fielder’s choice. That forced Bell out at second base.

From there, Jackson Glenn singled and that forced TCU into a pitching change, bringing in River Ridings for Drew Hill.

It went from bad to worse. Jace Grady walked to load the bases. But, even then, with a four-run cushion, TCU must have felt somewhat secure that it could get out of the inning with the lead.

George Specht came into pinch-hit and his ground ball to TCU third baseman Brayden Taylor turned into an error, leading to Town coming home. It was 6-3 TCU.

With the bases still loaded, Andrew Benefield singled to right field, scoring Glenn to cut TCU’s lead to 6-4. Still, it was manageable for TCU. But, just in case, the Horned Frogs brought in Luke Savage to relieve Ridings.

The fire continued to rage. Christian Boulware doubled to the left-center field gap, and that was enough to clear the bases and give DBU a 7-6 lead. In just a few at-bats, the Horned Frogs were no longer in control.

For those that might not know, DBU plays the Horned Frogs often, though the two programs didn’t play in the regular season this year. Saturday’s game was their 80th overall meeting. While the Patriots’ win on Saturday was just their 29th all-time against TCU, the Patriots clearly weren’t intimidated by the Horned Frogs, based on past experience.

TCU started this game in a 2-0 hole. In the top of the fourth, the Horned Frogs were working to send a message to the Patriots, and it finally happened. The inning started with a double from Porter Brown to left field. That was followed by Zach Humphreys’ walk. With two runners on, Patriots starter Rhett Kouba tried to get out to the mess. Getting Braden Taylor to fly out was a good start. But Hunter Wolfe put an end to that a hitter later. His three-run shot to left field on a 2-0 pitch put the Horned Frogs up, 3-2.

Wolfe, frankly, has been on a hot streak of late. He had 10 RBI in the Big 12 Tournament, where the Horned Frogs won the title. He was hitting .321 coming into the NCAA playoffs. He was on the Big 12 All-Tournament team, too. He’s catching fire at the right time.

Plus, Wolfe’s home run, well, triggered a dance celebration in the TCU bullpen.

The Horned Frogs will have to win this regional the hard way. They’ll face Oregon State on Sunday afternoon. That means the Horned Frogs not only need to beat the Beavers — a team they’re 3-1 against all-time — they must beat DBU again on Sunday evening to force another gave with the Patriots on Monday. TCU has a hard road ahead.