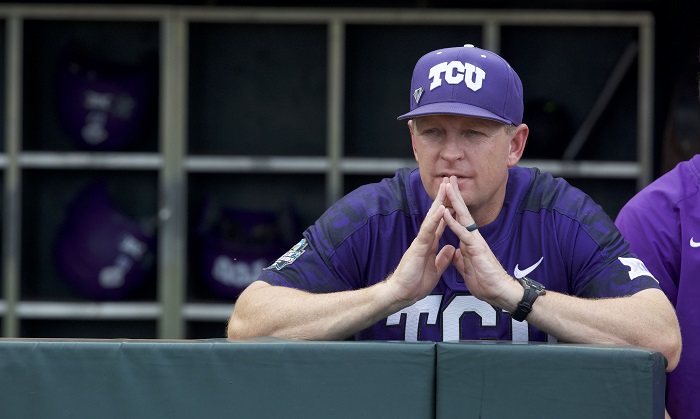 The TCU Horned Frogs ended their NCAA baseball regional with a 3-2 loss to Oregon State on Sunday in Fort Worth, Texas. Here are three takeaways from the end of TCU’s season.

The Horned Frogs and Beavers were tied at 2-2 after Oregon State scored two runs in the top of the fifth inning. It stayed that way until the ninth inning, when the Beavers managed to manufacture a run off of All-Big 12 closer Haylen Green.

The Beavers small-balled their way to the lead and the win. Green hit Kyle Dernedde with a pitch, and after that Dernedde stole second base. Wade Meckler grounded out to third base for the first out. But then Justin Boyd singled up the middle to bring home Dernedde and give the Beavers the lead. The Horned Frogs escaped just one run down. But, in the bottom of the ninth, the Horned Frogs went down swinging — literally. Porter Brown, Zach Humphreys and Brayden Taylor all struck out to end the game and TCU’s hopes of reaching the super regional the hard way.

Meckler, by the way, was the player who drove in the two runs that allowed OSU to tie the game.

The Horned Frogs had just three hits against Oregon State starter Jake Pfennigs and four Beavers relievers. In fact, Pfennigs gave up two of the three Horned Frogs hits. So that Beavers bullpen proved to be nearly unhittable for the final four innings. Still, it was TCU that had the lead, 2-0, after two innings. In the first inning, the Horned Frogs were crafty, getting Humphreys home on a double steal with Taylor. In the third, Humphreys played a role again, drilling a leadoff double before reaching third on a fielding error that allowed Taylor to reach first.

That was followed by Hunter Wolfe’s pop-out and Gene Wood’s walk to load the bases. Phillip Sikes then flew out to left field, which allowed Humphreys to score on the sacrifice.

But the Horned Frogs left the other two runners on the bases to end the inning. From that point, TCU had one more hit.

On the hill, Charles King gave up nine hits in 5 1/3rd innings but only two runs. The Horned Frogs’ bullpen was solid, giving up just two hits. The Beavers just managed to put the offense together at the right time.

Considering the Horned Frogs were a national seed and the Big 12 Tournament champion, failing to get out of its own regional really hurts. TCU ends the season 40-19 after losing consecutive games to Dallas Baptist and Oregon State, which will now meet to get out of the regional and move on to the super regionals. This was an experienced group that waited more than a year for a shot at getting back to Omaha, and this was the wrong time for things to go south. If we’re being honest, the loss to Dallas Baptist really hurt. The Horned Frogs had control of that game and lost it on Saturday night. That put them in the position to fall in a close, well-played game with the Beavers.