Thomas is one of the best defenders on OU’s team, as he led the Sooners with 13 tackles for loss and 8.5 quarterback sacks during the 2020 season. Also, he finished last season with 46 total pressures and 29 hurries, which were both second on the team to Nik Bonitto.

The Cleveland County Sheriff’s Office didn’t include any details about the petty larceny, but reported that Thomas was arrested at 2:08 a.m. and was booked at 2:59 a.m.

Here’s a look at his mug shot and the details. 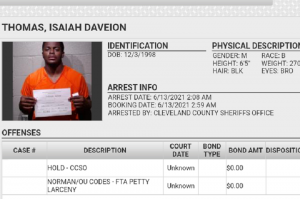 Thomas was a second-team All-Big 12 Conference player in 2020, his first as a starter, and under defensive coordinator Alex Grinch, OU is poised to have one of its best defensive fronts in over a decade.

Depending on the outcome of this situation, it could drastically impact the expectations for the OU defense in 2021. As more details emerge, we will have them for you here at Heartland College Sports.