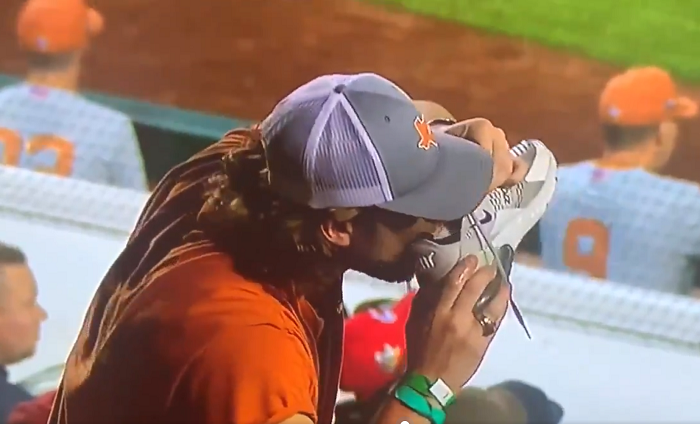 The Texas Longhorns baseball season came to an end on Saturday night, losing to Mississippi State in walk-off fashion. But one of the highlights of this unlikely run from losing their first game of the College World Series to almost reaching the National Championship will be the Texas fan who poured a Coors Light into his shoe and drank it during Friday night’s win over the Bulldogs.

Here’s the video of this UT fan in Omaha.

As someone who enjoys an ice cold Coors Light on a Friday night, I’m a little stunned he’d put it in his shoe and drink it. It’s an insult to the almighty Silver Bullet. However when it comes to bringing good fortune to one’s team, I will let it slide.

And to this fan’s credit, it worked. My question is where was he on Saturday night? I’m sure he was there, or at least I hope he was, and while the cameras may have not caught him chugging a Coors Light out of his shoe, I’ve got to figure he tried the same trick again.

But as we all know, you can only go to the “beer-chug-out-of-the-shoe trick” so many times before your luck runs out.

Where Are They Now? The 5 Top Big 12 NFL Draft Picks from 2011
Phil Steele Predicts Oklahoma Sooners to Win National Championship
To Top