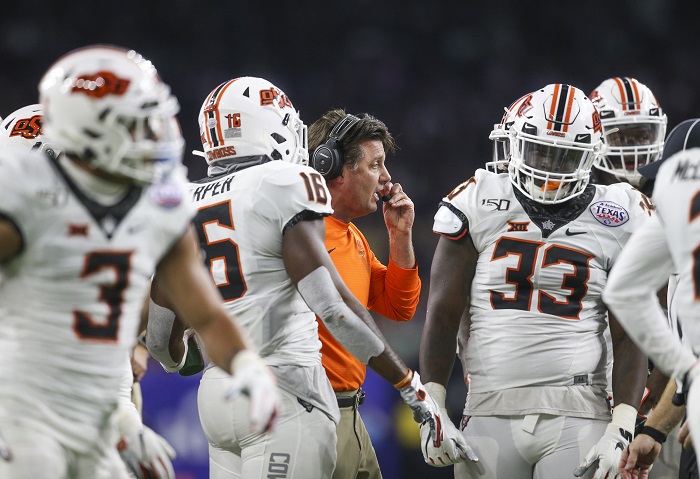 Oklahoma State’s defensive unit last season was a much welcomed surprise for Cowboy fans. OSU sported, easily, the team’s best all-around defense since Mike Gundy took over in 2005. Some people (me) even found the defense more exciting to watch than the offense, which is almost inconceivable in a conversation about Oklahoma State football. With only two starters missing from last year’s squad, defensive coordinator Jim Knowles will look to improve on an already stellar unit with his 2021 group, which has the potential to be just as good or better than a year ago. Here are a few things that will assure success for the Pokes’ defense come fall (which can’t get here any faster!).

Looking at 2020 total defensive rankings, Oklahoma State actually ranked relatively low for as much as I’m hyping them up right now, only finishing fifth in the Big 12 and 44th in the country. The reason for this, I believe, is because the Oklahoma State offense struggled heavily and were forced into an inordinate amount of three-and-outs, meaning that the defense barely got a break before they were thrust into action again. I’ve been saying it last season that the Pokes should not have to rely on the defense to win ball games. You can stop people all day long, but if you’re not capitalizing on those stops with points then eventually your opponent will. Essentially, a major key to the Cowboys’ success this season will rely on the OSU offense to score points, or at least extend drives, rather than quick three-and-outs.

The Cowboys lose two key starters from a year ago that anchored the defensive unit. Cornerback Rodarius Williams was drafted in the sixth round by the New York Giants and linebacker Amen Ogbongbemiga went undrafted to the LA Chargers. These are big losses for sure, but I believe Jim Knowles has more than enough talent to fill the holes they left behind. At the corner spot, seniors Christian Holmes or Jarrick Bernard-Converse will likely either take over the strong-side corner position. Holmes started at the opposite corner spot of Williams last season, while Bernard-Converse occupied the nickel spot and occasionally moved out wide. Both have proven capable of defending teams’ best receiving threats, with Holmes having a little more experience at outside corner. Replacing the linebacker spot also shouldn’t be of concern, with Devin Harper returning alongside Malcolm Rodriguez. Other guys who could vye for playing time at the position include junior Lamont Bishop, sophomore Na’Drian Dizadare and sophomore Mason Cobb.

A December ACL tear forced junior defensive end Trace Ford to miss the Cowboys’ bowl game, and with athletes typically needing 8 to 10 months to recover from ACL injuries, many wondered when or if we’ll even see Ford on the field this season. That was until we caught a glimpse of Ford participating in drills in practice a couple weeks ago.

Safe to say, Trace is making massive progress in his recovery. The junior from Edmond, Oklahoma, burst onto the scene in 2019 with 29 tackles, three sacks, an interception and nine QB hurries as a true freshman. He followed it up with similar stats in 2020 until his injury and should he recover in time, will be primed for another productive season as one the country’s best pass rushers.