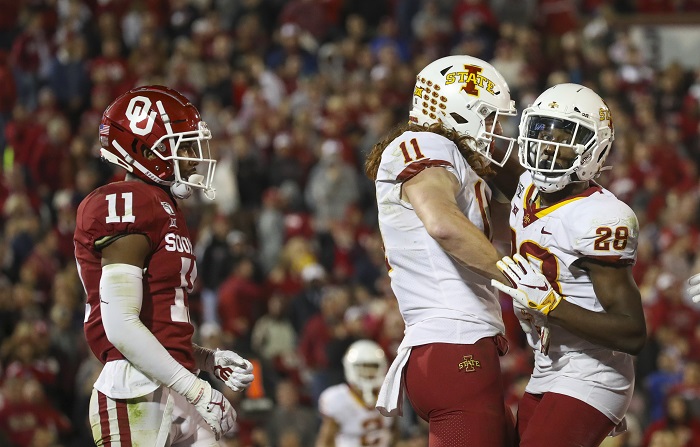 Going into 2021 everyone wants to talk about the likes of Breece Hall, Brock Purdy, Charlie Kolar, and Mike Rose just to name a few. With good reason, those are the guys that you typically hear the most about. Each one of those players is one of the best, if not the best, at their position in the entire country. Those four guys are some of the biggest reasons why Iowa State is getting talked about as much as they are headed into 2021. However, there are plenty of guys that aren’t being looked at as closely, that will absolutely play a huge part in Iowa State’s success in 2021.

Here’s a rundown of five guys that Cyclone Nation is likely familiar with, but the rest of the Big 12 should keep an eye on.

Milton often gets overlooked given he plays alongside Xavier Hutchinson, 2020 Big 12 Offensive Newcomer of the Year and 1st Team All Big 12. Milton battled injury throughout most of 2020 only playing in 6 games and recording 15 catches for 102 yards. Don’t be fooled, Milton is absolutely one of Iowa State’s most electric weapons on offense. In 2019, he started all 13 games and hauled in 35 catches for 722 yards, and 3 touchdowns. He was also a 3rd Team All Big 12 punt returner his freshman year in 2018. If Milton remains healthy, expect him to have an All Big 12 season again as a wide receiver.

Often referred to as “Dr. Chase Allen” by many Cyclone fans and his teammates, isn’t exactly “overlooked”. With that said Allen is not the main tight end you think of when you think about tight ends at Iowa State (Charlie Kolar). Chase is a 3 time 2nd Team All Big 12 performer. In 2020, Allen posted 19 catches for 236 yards and 2 scores. Allen goes into his super senior season with 48 catches, 526 yards, and 4 touchdowns. Iowa State had the top tight end group in the nation last year. Now that Dylan Soehner has moved onto a career in the NFL, expect Allen to contribute even more than he already has in the past.

Coming out of high school Brock chose the Cyclones over Notre Dame, Michigan State, Iowa, and Minnesota. Brock was a 4 star recruit and even ranked higher than Breece Hall, incredibly enough. Last year’s backup tailback, Kene Nwangu, had 339 yards and 4 scores on 60 carries. Brock will more than likely have a similar workload as Nwangu had in 2020. He is also very key in blocking as well. Expect Brock to be another key cog for the Cyclones in 2021 now that he will have more opportunity.

Johnson Jr. often gets overlooked in the loaded ISU secondary, often behind Greg Eisworth and Isheem Young. In 2019 & 2020 Johnson Jr. was All Big 12 Honorable Mention. He also has a streak of 28 straight starts for the Cyclones. In 2020 he had 40 tackles, 2 tackles for loss, and 5 pass break-ups. He has proven himself to be one of the top shutdown corners in the conference, often getting the opponents top receiver to cover. Throughout his career he has 10 total tackles for loss, 20 pass breakups, and 2 forced fumbles.

2019 All Big 12 Honorable Mention, and the 2020 Fiesta Bowl Defensive MVP, yet most people aren’t familiar with Vance. Whenever you think about linebackers at ISU, you think about Mike Rose. However, start paying attention to Vance as well. He recovered 2 fumbles and a tackle for loss in the Fiesta Bowl win over Oregon. Throughout his career has recorded 158 tackles, 19.5 tackles for loss, 9.0 sacks, and 4 fumble recoveries. This guy is no joke, and certainly should not be overlooked. This will be his 3rd year in a row starting at the Mike linebacker position. Keep an eye on #34.

Despite Conference Realignment, 2021 Can be Special for the Big 12
In a Big 12 ‘Expansion’ Scenario, What About UCF?
To Top