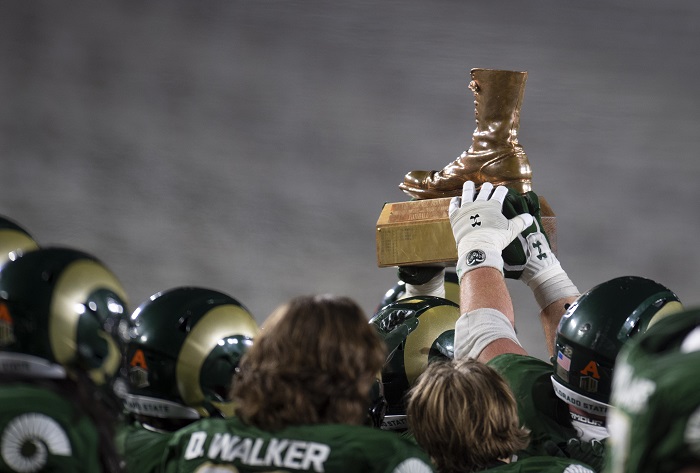 So, for now, the eight remaining Big 12 members want to hold it together. But they probably need some help. What about the Colorado State Rams?

When I wrote my piece on BYU recently, that was actually a question from a follower on Twitter, and this follower presented a pretty solid case for considering the Rams, who are in the Mountain West Conference.

Perhaps the best thing the Fort Collins, Colorado-based program can bring to the table is its television market. When the Big 12 had the Colorado Buffaloes, they could certainly boast the Denver television market. The Big 12 lost that when Colorado bolted for the Pac-12. Colorado State, even though it’s a half-hour farther away from Denver than Boulder, is still about an hour away from Denver and could help the Big 12 get at least SOME access back to that market.

READ MORE: In a Big 12 ‘Expansion’ Scenario, What About UCF?

If the logic is that BYU’s Salt Lake City market would help the Big 12, the same argument should hold true for Colorado State. Heck, BYU also shares a TV market with another college football program — Utah.

I think the Big 12 would be interested in that access, if they could get it. Plus, Colorado State boasts a much bigger student body than you might think. The CSU system’s enrollment passed 34,000 in 2019, and that brings a large alumni and donor base. Plus, the football program got a brand-new stadium just a few years ago, so facilities aren’t an issue.

Now, the quality of the program? Let’s discuss that just a bit.

The Rams haven’t won a conference title since 2002 under Sonny Lubick. Since then, the program has had seven winnings seasons, but just one 10-win season, which came in 2014 under Jim McElwain (who promptly left for Florida the first chance he got). Steve Addazio is now the head coach, and his job is to make the Rams consistent winners (and not just three straight seven-win seasons from 2015-17 under Mike Bobo).

The point is no one is confusing a program like UCF with Colorado State (I pointed out the Knights’ recent success in a previous piece). The Big 12 would certainly be a step up for the Rams, both in prestige and in competition.

If the Big 12 chooses to expand, the Rams are worth considering, though my thought would be to try and pair the Rams with another Mountain Time Zone program. As a standalone, they may interest the Big 12 less, unless they feel the access to the TV market alone will be a significant chip to bring to the table.