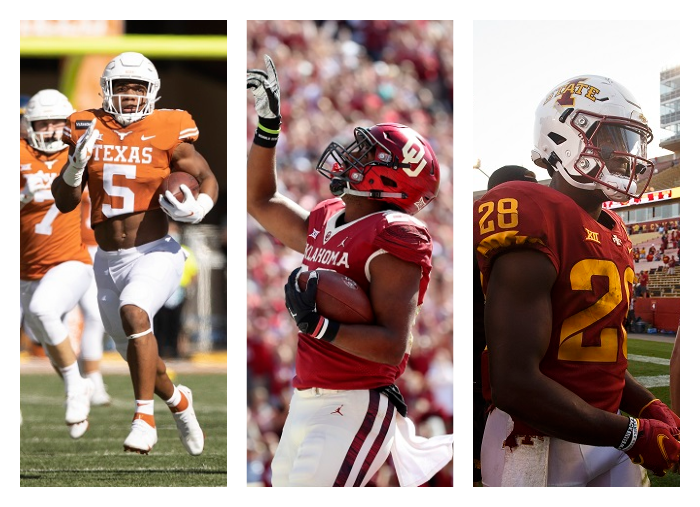 With kickoff just a few Saturdays away, I thought it would be a great time to do some position rankings in the Big 12. We’ve already ranked the Big 12 quarterbacks, so no we move on to the Big 12 running backs.

There are some good running backs in this conference, but Breece Hall was on a different level in 2020. He not only led the Big 12 in rushing yards, but he was also the nation’s leading rusher in college football last season. Hall also won the Big 12 conference offensive player of the year award in 2020 as well. He deserves the praise he gets and should be the favorite to win the Doak Walker Award this season. To me, he is the best running back in the Big 12 until proven otherwise.

Some may argue that when it comes to talent, nobody is more talented that this man. There is no question Bijan Robinson has plenty of talent and unfortunately, Tom Herman underutilized him last season. Despite that, Bijan still rushed for over 700 yards in a shortened year and averaged a whopping 8.2 yards per carry. This year he should be the main focus on offense for Texas and I can’t wait to see what he can do when he is given more opportunities with the football in his hands.

Don’t let his size fool you, Deuce Vaughn can play football. He burst onto the scene as a true freshman last season and made a huge splash. He ran for over 600 yards in 2020 and also had over 400 yards receiving. It’s not often you see running backs do that anymore, but Deuce is not your typical running back. He can squeeze through holes like few other can and can make people look silly trying to stop him. Good things happen when he gets the ball and Kansas State knows that.

Some may have forgotten about him because he sat out the 2020 season, but I am here to tell you, do not do that. While he may not completely wow people with his running style, the guy is simply productive. He was a key part of the Sooners offense in 2018 and 2019 as he had back-to-back one-thousand-yard seasons. While his numbers dipped from 2018 to 2019, Brooks should still be the leader of the backfield in Norman and should get plenty of carries this season alongside Eric Gray.

One could argue that he belongs higher on this list and that is totally fair. Leddie had his breakout season in 2020 as he rushed for over one thousand yards in a shortened season. He was the engine for that West Virginia offense last year and will likely be the main man for them again this season. He is a solid runner and can make things happen in the open field. Brown was a top three rusher in the Big 12 last year and could very well be in the top three again in 2021.

This is a bit of a projection pick but I feel good about Zach Evans in this number six spot. Coming out of high school, Zach was ranked as the number one player in the state of Texas in the 2020 class and the number two overall running back in the country for that year according to 247 Sports. He was the highest rated recruit TCU has ever signed and despite not getting a ton of carries last season, he showed what he can do as he averaged an outstanding 7.7 yards per carry. Evans is capable of being a standout running back and we should start seeing that this season with more touches.

Outside of Kennedy Brooks, the Sooners are also getting running back Eric Gray from Tennessee. Last season, Gray led the Vols in rushing yards (772) and rushing touchdowns (4). While he may not be the fastest running back in the world, he does possession good vision and is quick to make the cuts he needs. He also played a good part of their passing game as he was second on the team in receptions (30) last year. Eric should help provide a great one-two punch in the Oklahoma backfield with Kennedy Brooks.

Texas Tech’s offense was not that great last season but one of the bright spots was running back SaRodorick Thompson. He made some big plays in 2020 as he rushed for over 600 yards and had eight rushing touchdowns. He is currently rehabbing a shoulder injury and according to head coach Matt Wells, they should find out more on his progression next week. Hopefully for the Red Raiders, they can get him back on the field soon to help out the offense.

Though much of his career has been overshadowed by Chuba Hubbard, LD Brown has been a solid backup. Last season, he got his chance to shine when Hubbard was hurt, and he did a superb job filling in. LD finished the short season with over 400 yards and while those numbers don’t sound like much, he got hurt late in the season as he had to miss a few games. Now he is back fully healthy and looks to be the lead man in the Cowboys backfield.

I will be flat out honest with you: I had no idea who Dezmon Jackson was coming into last season. He was behind on the depth chart but when the injuries started to pile up at running back, Dezmon got his chance, and he made the most out of it. He had just two games where he got over ten carries and in those two games, he combined to rush for 353 yards and four touchdowns. With Chuba Hubbard off to the NFL, Dezmon should get more carries this season along with LD Brown.