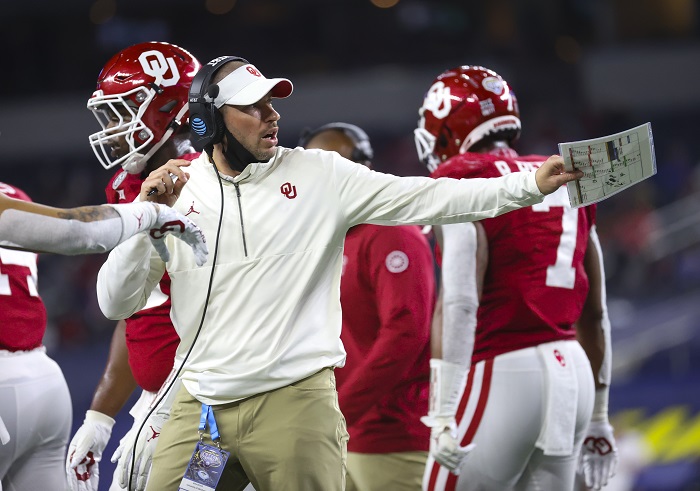 Having a great defense is imperative to winning a national championship. In his third year as the Oklahoma Sooners’ defense coordinator, Alex Grinch expects his defense to be better this season than the previous two.

The Oklahoma Sooners had some phenomenal defenses that helped capture seven national championships before.

The championship team of 1955 was even better, allowing just 5.5 points and 190.6 yards per outing. The 1955 unit had only two All-Americans (guard Bo Bolinger and halfback Tommy McDonald) and a handful of all-conference first-team selections—tackles Ed Gray and Cal Woodworth, guard Cecil Morris, linebacker Jerry Tubbs, and halfback Bob Burris.

McDonald would again be chosen as an All-American in 1956 as the Sooners won back-to-back national championships contributed by a third straight undefeated season and 40 consecutive victories. Arguably, this defense was OU’s best by yielding only 5.1 points and 193.8 yards per game. The first All-American team that year included three more Sooners—Tubbs and guards Gray, Bill Krisher. McDonald and Tubbs split the vote for the Heisman Trophy that year, finishing third and fourth, respectively. Paul Hornung from Notre Dame won the coveted award that year, although OU blasted the Fighting Irish, 40-0.

McDonald was named the winner of the Maxwell Award in ’56, and he is an inductee in the College Football Hall of Fame along with Tubbs. McDonald also was the first Sooner player to be inducted into the NFL Hall of Fame.

Sooner fans would have to wait 18 years before another national championship trophy came to Norman. As a matter of fact, they won two-in-a-row becoming the first team in college football history to claim back-to-back titles.

OU went 11-0 in 1974 and held opponents to 13.3 points and 236.1 yards per game. The Sooners boasted 11 All-Big Eight first-teamers, including five on defense—tackles Lee Roy and Dewey Selmon, end Jimbo Elrod, linebacker Rod Shoate, and safety Randy Hughes. All but Elrod was named to the All-American team. Shoate was named All-American for a third straight year and later inducted into the CFHOF.

Elrod did make the All-American squad the following year, joining the Selmons, who were chosen again. Cornerback Zac Henderson, who joined them on the All-Big Eight defense, would become an All-American in 1976. The 1975 Sooners lost one game, but a stout defense in the Orange Bowl gave them a 14-6 victory over Michigan. The Wolverines averaged 29 points per game before the Orange Bowl. Oklahoma held the opposition to 13.3 points and 254.8 yards per game in ’75.

Lee Roy Selmon earned the Outland and Lombardi Trophies in 1975 and later was inducted into the College and NFL Hall of Fames.

Ten years later, Barry Switzer earned his third national championship with the help of another rugged defense led by linebacker Brian Bosworth, noseguard Tony Casillas, and end Kevin Murphy, all who were All-Americans. End Darrell Reed joined the trio on the All-Big Eight first team. Reed was an All-Big Eight first-team choice all four years he played at OU and should have been an All-American. Those Sooners held foes to an average of 8.6 and 199.6 yards per outing.

Bosworth won the first Butkus Award, and again in 1986. Casillas earned the Lombardi Award. Bosworth and Casillas later earned induction into the CFHOF.

Oklahoma hired a defensive guru as its head coach before the 1999 season. Bob Stoops brought in his brother, Mike, and Brent Venables as co-defensive coordinators. In two years, the Sooners staked claim to their seventh natty. The 2000 defense held opponents to 14.9 points and 280.6 yards per game. All-Americans Rocky Calmus, who also garnered the Butkus Award, and safety J.T. Thatcher led the defense. Linebacker Torrance Marshall, tackle Ryan Fisher, and safety Roy Williams would join Calmus and Thatcher on the All-Big 12 squad.

The bar is set high, and it’s time for a new group of stars to make a legacy of their own if the Sooners want to capture No. 8 this year.