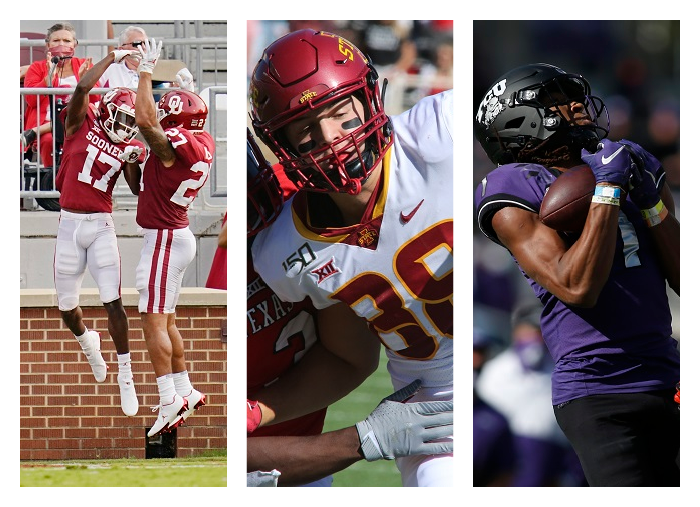 With kickoff just a Saturdays away, I thought it would be a great time to do some position rankings in the Big 12. Today we will wrap up the offense with the receivers and tight ends.

With quarterbacks and running backs already done, I decided to finish up the offensive side of the ball by ranking the ten best pass catchers in the Big 12.

While other wide receivers on Oklahoma’s roster may have more physical traits, Marvin Mims is just flat out productive. He caught nine touchdown passes last season which was tied for first in the conference and averaged a whopping 16.5 yards per catch in 2020. Marvin was also top five in receiving yards (610) and while some may not agree with him being this high on the list, he should be taken more seriously in the Big 12 as his numbers will go up in 2021.

Another Iowa State player in the top three? Absolutely! I was not sure what to expect from Xavier Hutchinson last season, but he really came on strong in the second half of the 2020 season. Hutchinson was an All-Big 12 selection last year and finished the season with 771 receiving yards which was second overall in the conference only behind Oklahoma State’s Tylan Wallace. When you talk about Big 12 wide outs, Xavier Hutchinson belongs in that top three conversation.

Texas Tech has always had a long line of good wide receivers and that trend continues with Erik Ezukanama. Erik made plenty of big plays for the Red Raiders last season despite the season not going as planned. In a year of disappointments, Erik was one of the few bright spots as he had over 700 receiving yards last season. He may get lost in the shuffle when talking about receivers, but Erik is certainly due for a one-thousand-yard season this year and will likely be an All-Big 12 receiver once again come December.

If there is any receiver in the Big 12 who is under appreciated, it is Quentin Johnston. Despite mediocre quarterback play, Johnston was still nearly able to get 500 yards receiving in a shortened 2020 season. While he showed just a few flashes early, his best two and only two one-hundred-yard performances came in the last two games of the season. At 6’4, he is a big-time target for Max Duggan, and he has proven that is capable of making big plays as he was the only player in the Big 12 who had at least 20 receptions and averaged over 20 yards per reception. In fact, he was top five overall in the entire country last season with his amazing 22.1 yards per catch in 2020. He is due for a breakout season in 2021.

Winston Wright Jr. had his coming out party last season. Before last season, Wright got a few opportunities his freshman season (2019), but he became the leading receiver for the Mountaineers in 2020 with over 550 yards receiving. Despite his size, he was the most reliable target for quarterback Jarret Doege which was crucial due to other receivers taking a backseat. While the Mountaineers have a few options at receiver going into 2021, I do wonder if Winston Wright Jr. can take it to another level this year.

Although he played in just eight games last year before a season ending injury, Austin Stogner was a key part of the Sooners passing game. Outside of Charlie Kolar, Stogner is the best tight end in the Big 12 and he showed that he can play at a high level as he racked up 422 receiving yards in 2020. Oklahoma has plenty of targets to throw the ball to, but Austin Stogner brings another dimension to that Lincoln Riley offense. I can’t wait to see him fully healthy this year.

There was a lot to smile about on offense for Baylor in 2020. The record was bad, and the offense was worse. However, a wide receiver made a big leap last season and that of course was none other than RJ Sneed. He played in just nine games and despite bad play all around him, he managed to end the year with nearly 500 receiving yards. If he can take another step forward this season, he could once again be Baylor’s go to man, but it will be interesting because the Bears do have other options at the position that are capable of making plays.

He may be overlooked even by Texas fans, but it is hard to argue the production Joshua Moore had on the football field last year. In a short season, Moore was able to catch nine touchdown passes in 2020 which was tied for the most in the entire Big 12. It will be interesting to see what the new look Longhorns will do with him this season but when he was on the field, he was a big part of the Texas offense at the receiver position.

Some may not even know who Mike Woods is, but I am here to tell you, he could be the next big star in Oklahoma’s offense. He looks to be in great shape in fall camp and coming in from Arkansas, he should be poised to put up even bigger numbers than what he did last season in Fayetteville. I could be wrong here, but I think by season’s end, Mike Woods could be a name to keep an eye on.