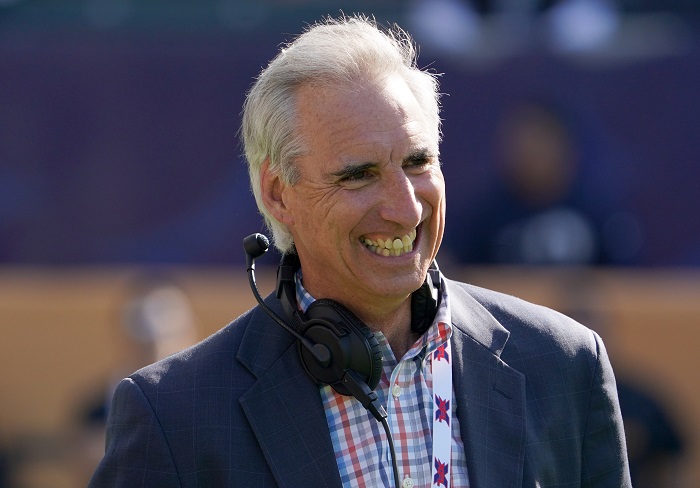 I want to thank each one of you who submitted a question this week and for those reading, I am glad you could join me. I am doing this on late Monday evening and of course this mailbag beverage wouldn’t be nearly as fun without a right next to me. Tonight’s drink of choice? I am drinking a delicious Four Roses Single Barrel. Cheers!

@finnegap asks: What are your thoughts on the Big 12 hiring of Oliver Luck as a consultant? What do you see him bringing to this role?

Duke: For those who don’t know Oliver was a former AD for West Virginia and even worked for the NCAA as well after that. I think Oliver is a smart guy and will obviously help the Big 12 as much as he can but at this point, it would be hard for me to say that he will be the guy who saves this conference from falling apart. This was a good move for the Big 12 but I am not sure how much it will change the future.

@fraseriii asks: Forget conference realignment or mergers, I’m going to ask what we all want to know. Which Big 12 head coach is going to be the next to lose to Kansas and get fired soon afterwards?

Duke: I honestly do not think Kansas will get a Big 12 win this season. Maybe in 2022 but I don’t see it happening this year. With that said, the next coach to get the boot in my opinion is Texas Tech head coach Matt Wells. When I look at all of the current situations going on around the Big 12, he has a ton of pressure going into this season and if he doesn’t at the very least reach a bowl game, he could be out of a job by December. Plus, I was never really a fan of the Matt Wells hire to begin with and I think it would be wise for Tech to move on if they can’t make a bowl game in 2021.

@troyboy8ball asks: Which is greater: your love for Iowa State, or your hatred for Texas? Also, which CFB team did you root for growing up? Considering that you’re a native Texan (right?), I assume it was one of the teams in our great state.

Duke: Well, I can’t say I love Iowa State and hate Texas. I just call things as I see fit. Despite what some people may think, I do not wake up in the morning and put on an Iowa State jersey before getting my morning coffee. Sorry to disappoint people there and as for Texas, I am just flat out honest when it comes to the Longhorns. It just seems like I hate them because their expectations are much higher than what they should be most times and I don’t raise a bar that can’t be raised.

As for the second part of the question, yes, I am a native Texan and I think it is best that I keep any rooting interests to myself as I try to cover this conference as fairly as possible. But I will say this, covering college football has definitely changed my way of viewing games. I no longer let a win or a loss control my day because all I really want now is to be able to write a good story out of it.

Duke: As far as the best coach goes, it is Lincoln Riley until proven otherwise. We have some solid head coaches in the Big 12 but if I had my pick, I am still taking the offensive minded Lincoln Riley.

For most underrated I would probably lean towards Mike Gundy. I think people tend to forget about Oklahoma State sometimes because they have not really been able to take that next step the last few years but do not let that distract you from the fact that he is a proven winner. Over the last ten years, only one program has won more games than Oklahoma State which of course is Oklahoma. Despite that fact, people still are ready to run Mike Gundy out of Stillwater and because he has been there so long, some people really do forget that he is there but look at the win column, he has always been there.

@DwainR11 asks: After the Sooners run the table in the regular season, what team not named Iowa State do they likely meet in the championship game?

Duke: I kept this question of yours because I thought it was an interesting one. If the Cyclones are not able to reach the Big 12 title game something has gone wrong. Most likely an injury but I am not going to worry about that since you did not ask why. Next in line to replace them would be Oklahoma State or TCU. I am high on TCU this season with Max Duggan coming back as well as a solid defense. The offense should make positive strides this year to become a conference title contender. As for the Cowboys, they have a great defense and some starters back on the offensive line and most importantly, they bring back Spencer Sanders at quarterback. If Sanders can take that next step as a quarterback, that team will be a top three team in the Big 12.

@Schmitty27 asks: As the season approaches and All-America lists come out along with preseason ranking etc. Who does the media seem to be bullish on and who is getting over looked in the conference?

Duke: Here is the thing folks. I try not to pay too much attention to other media outlets when it comes to ranking Big 12 teams. There is no need to get my blood pressure higher than it needs to be. As we all know on Twitter, there are one hundred new college football accounts every single day that come out with cringe worthy lists. I do my best to avoid those and you should too.

However, I did take a peek at the CBS Big 12 rankings on Monday and I saw one person had Texas as an underrated team so that is how you know we are still in the offseason. Barrett Sallee said last week that Oregon was underrated nationally and that Iowa State was overrated. I guess someone fell asleep during the Fiesta Bowl. But there was two writers that caught my attention. Ben Kercheval and David Cobb. One had TCU finishing seventh in the Big 12 and the other had Oklahoma State finishing seventh in the Big 12. There is no need for me to argue with stupidity there.

2021 Big 12 Football Pass Catchers Rankings
Kansas State’s Future is Uncertain, But More Attractive Than Given Credit For
To Top