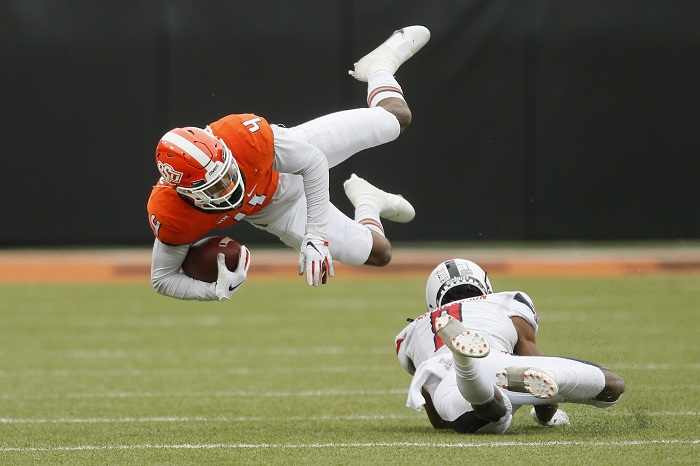 Amidst the conference realignment and alliance news, many seem to be forgetting that college football will be being played this weekend. Nebraska and Illinois kick off the season on Saturday after one of the most eventful offseasons in history, with many programs looking at uncertain futures.

Oklahoma State is one of those programs, and with the team’s future at the front of Cowboy fans’ minds (mine included), I’ve decided to take a step back and focus on the now by looking at one Cowboy in particular that is poised for a breakout year in 2021; wide receiver Tay Martin.

The former Washington State transfer arrived in Stillwater last year less than a month before the Cowboys’ season opener. Because of this he was forced to pick up the playbook and conditioning on the fly, which resulted in limited action throughout the season.

“I was too far (behind), honestly, as far as the plays go,” Martin said during a media presser.

It wasn’t until the season finale that Martin showed glimpses of his star potential. Against Miami in the Cheez-It Bowl, Martin caught six balls for 73 yards, his best performance as a Cowboy. On the season, he recorded 15 catches for 149 yards in very limited playing time.

Martin, a former 4A All-State first-teamer at Ellender Memorial High School in Houma, Louisiana, opted to return to Oklahoma State and utilize the extra year of eligibility as a result of the NCAA’s ruling on COVID-19 a season ago, and with starting receivers Tylan Wallace, Dillon Stoner and Landon Wolf graduating, the super senior will be looked at to take on a bigger role in 2021.

Martin is a 6-foot-3, 186-pound “Z” receiver who uses his height and length to make plays over defenders, showcased mostly during his three years at Washington State, where he caught 143 passes for 1,615 yards and 18 touchdowns. He also has a high school track background, which explains why a large bulk of his highlight tape is of Tay sprinting and beating his man on long routes.

With a full season and offseason under his belt, Martin will be more ready than ever to take on the mantle of Oklahoma State’s feature wide receiver. In a Mike Gundy offense that focuses heavily on a potent passing attack, I believe Martin will rise to the challenge and put up big numbers for the Pokes.