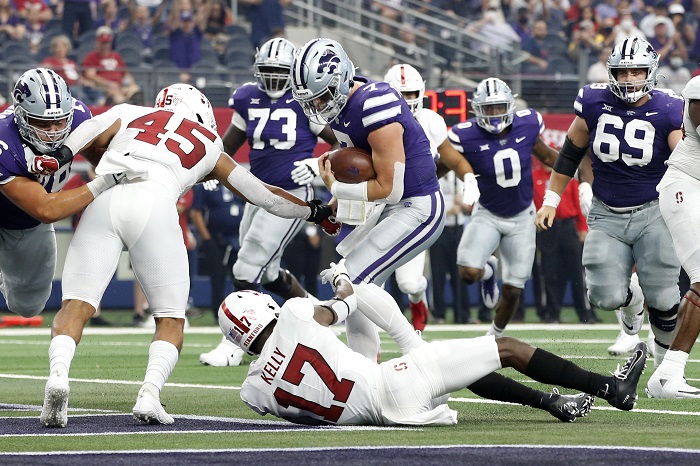 It was just over one week ago that the Pac-12 Conference announced it would not be expanding. In a statement, the league said in part, “This decision was made following extensive internal discussion and analysis, and is based on the current competitive strength and cohesiveness of our 12 universities.“

There’s no doubt that this was a bit of a slight at the “Other 8” Big 12 teams, who were all poking their heads around to different conferences to see if there was interest in their athletic programs and universities. The Pac-12 ultimately came to the conclusion that none of the “Other 8” were worthy of their conference.

As a result, the Big 12 is likely to expand, which to many of us is a great outcome of what has been a tough few weeks to handle.

But then Week 1 kicked off on Saturday, and things got even sweeter because the Kansas State Wildcats showed the Stanford Cardinal that the notion of a Big 12 program not being worthy of their conference is a farce. K-State rolled Stanford at AT&T Stadium in Arlington, Texas 24-7.

While Stanford was trying to figure out its quarterback situation, Skylar Thompson was proving that his coming back for the 2021 college football season could be a game-changer in the Big 12 this fall. Thompson was efficient through the air, finishing 9/14 for 144 yards, as well as on the ground, rushing for 33 yards on 10 carries and two touchdowns.

But this wasn’t just any opening win for Kansas State. In many ways, this was a win for the “Other 8” in the Big 12, who for the last several weeks have been called a “dead-man-walking” conference by the national media, who fawned over the SEC, Big Ten, ACC and Pac-12. This despite the fact that the latter two are only arguably better than what the rest of the Big 12 brings to the table. Remove Clemson from the ACC and it’s game over. As for the Pac-12, the league has been irrelevant in the national college football conversation for the last couple of seasons, at least. It’s been five years since the conference had a team in the Playoff (Washington). Their blue bloods (USC, UCLA) are down, and their middle tier teams are soft.

Then there were those who wanted to point out that certain Big 12 universities were not “AAU Status”, meaning the Big Ten and Pac-12 specifically may not be interested in them due to their more prestigious academics in those leagues. Others citied smaller TV markets and scoffed at the likes of a Manhattan, Kansas or Lubbock, Texas. “What do they really bring to the table?” That was the consensus talking point.

Yet, if you watched Saturday’s Kansas State vs. Stanford game, you saw a sea of purple and a smattering of maroon. Understandably, Stanford fans have a flight compared with most K-State fans being in driving distance to Arlington, but it still sent a message for those questioning the market sizes of some Big 12 schools, while not realizing the size of the alumni base and, more importantly, the passion of that alumni base might be just as, if not more, important. Oh, and all this came on the heels of last Saturday’s UCLA embarrassment on national television.

There’s no doubt there is a chip on the shoulder of the “Other 8” Big 12 teams and their fan bases. And both the football team and the fan base showed up for Kansas State on Saturday on national TV. The message was sent loud and clear from Arlington that while the narrative across the sport has been a one-note song for over a month, “Tape Don’t Lie”, and Kansas State, and the rest of the “Other 8” are on a mission to prove that this season.

San Diego State is a Worthy Consideration for the Big 12 Conference
Three Up, Three Down: Big 12 Football Week 1
To Top