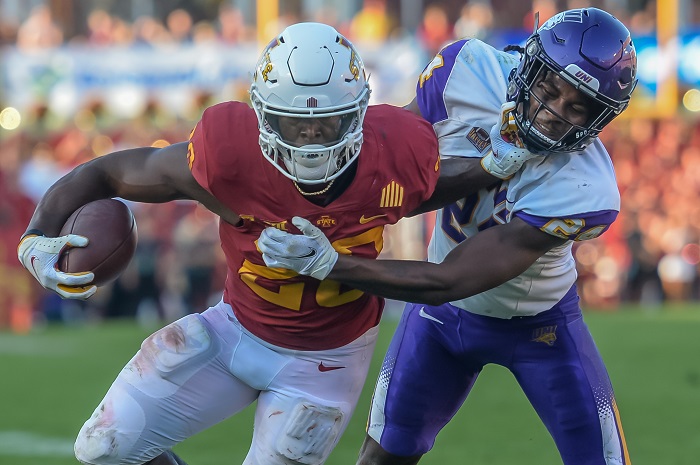 Stats don’t tell the whole story, especially early in the season. Nonetheless, tracking the numbers can ground observations and reveal emerging trends. However, it’s also easy to overreact and reach false conclusions based on stats from a small sample, so caveat lector.

That said, here’s a look at some of the numbers from the Big 12’s opening week along with some possible overreactions to the facts and a few thoughts of my own on each team:

3 Points scored in the second half of Iowa State versus Northern Iowa.

Note: This stat is particularly concerning for Oklahoma State and Oklahoma. Texas Tech’s tackling improved in the second half against Houston. OU and OSU were expected to field two of the better defenses in the league.

Note: Iowa State’s offensive anemia against UNI makes it difficult to defend the Cyclones’ Top 10 ranking to doubters. ISU needs to put the offense in high gear for its game versus the salty Iowa Hawkeyes. TCU’s defense made life very easy on its offense.

Note: The Sooners flirted with disaster, and we are left wondering if Oklahoma’s defense is really good enough to compete for a national title. Duquesne and Stanford’s offenses were dominated by TCU and KSU’s defenses.

Note: BU and KSU got it done on the ground, so their poor passing numbers may be more indicative of the fact that they didn’t need to throw the ball. OSU QB2, Shane Illingworth, got it done through the air.

Note: OSU’s leading rusher, LD Brown, only had 30 yards, 1 TD, on 15 carries. Who could’ve guessed that TTU’s Brooks would lead the league in rushing after Week 1?

Note: Ezukanma leads the pack by a large margin and looks like an NFL draft pick. TCU spread the ball around well and had good field position all night.

Note: These numbers are according to Pro Football Focus. One thing to keep in mind is that more tackles often indicates that the defense isn’t getting off the field.

Fact: Baylor led the league in rushing in Week 1.

Fact: Kansas State controlled the defensive line of scrimmage against Stanford with a 3-man front.

Possible Overreaction: Kansas State’s defense is the most improved in the league.

Possible Overreaction: Oklahoma State will finish in the bottom half of the league.

Possible Overreaction: TCU is ready to compete for a Big 12 championship.

Possible Overreaction: Texas is back.

Possible Overreaction: Texas Tech will finish in the top half of the league.

Thoughts on Each Team

I expected Baylor’s defense to be more dominant against Texas State. The Bears’ rebuild under Dave Aranda may not be as far along as I thought. They need to use the game against Texas Southern to iron out some kinks.

Even though Iowa State’s rough performance against UNI may have been predictable, it’s still highly concerning. Iowa was sharp in its win against Indiana, and ISU is going to have to look completely different this Saturday to have a chance at reaching 2-0.

Kansas’ first win in nearly two years is heartening. I still don’t think the Jayhawks will win a Big 12 game, but they’ll have a chance to beat Duke when they travel to Durham in Week 4.

Kansas State notched a nice win for the Irate 8 over the Pac-12 in convincing fashion. However, the Cats’ Week 3 opponent, Nevada, beat Cal in Berkeley and might be better than Stanford. Nonetheless, KSU is playing noticeably faster this season.

I expect Oklahoma to look like the team we thought it would be by the time Nebraska travels to Norman. In fact, Saturday’s scare against Tulane is probably exactly what the Sooners needed.

Oklahoma State’s QB2 Shane Illingworth performed admirably in a late notice start. OSU’s rushing offense, however, wasn’t so admirable, which raises a lot of questions about the Cowboys’ offensive line.

It’s hard to know what to think of TCU’s complete dismantling of Duquesne other than the Horned Frogs took care of business against a clearly overmatched opponent. TCU’s Week 2 opponent, Cal, was held to 17 points in its season-opening loss to Nevada.

Texas answered the bell against a ranked opponent and looked good doing it, but it’s difficult not to wonder if Louisiana is actually worthy of the Top 25.  Texas looks like a good team, but even Week 2’s matchup against Arkansas, which struggled to put away Rice until the fourth quarter, may not tell us much about how good Texas is or can be.

Texas Tech, Ezukanma, and Brooks put on a clinic in the second half against Houston. Oregon transfer Tyler Shough looked every bit the part of a Big 12 QB as well. The Red Raiders should cruise to 3-0 before traveling to Austin to open Big 12 play against the Longhorns.

West Virginia’s four turnovers against Maryland put its defense behind the eight-ball and sealed the Mountaineers fate. Now, with VA Tech’s Week 1 upset of North Carolina and WVU having to make the trip to Oklahoma open Big 12 play, the Mountaineers are looking at the potential of a worst case 1-3 start to the season.

After Week 1, The Big 12 Conference is the Deepest in College Football, For Now
Big 12 Football Power Rankings: Week 2
To Top