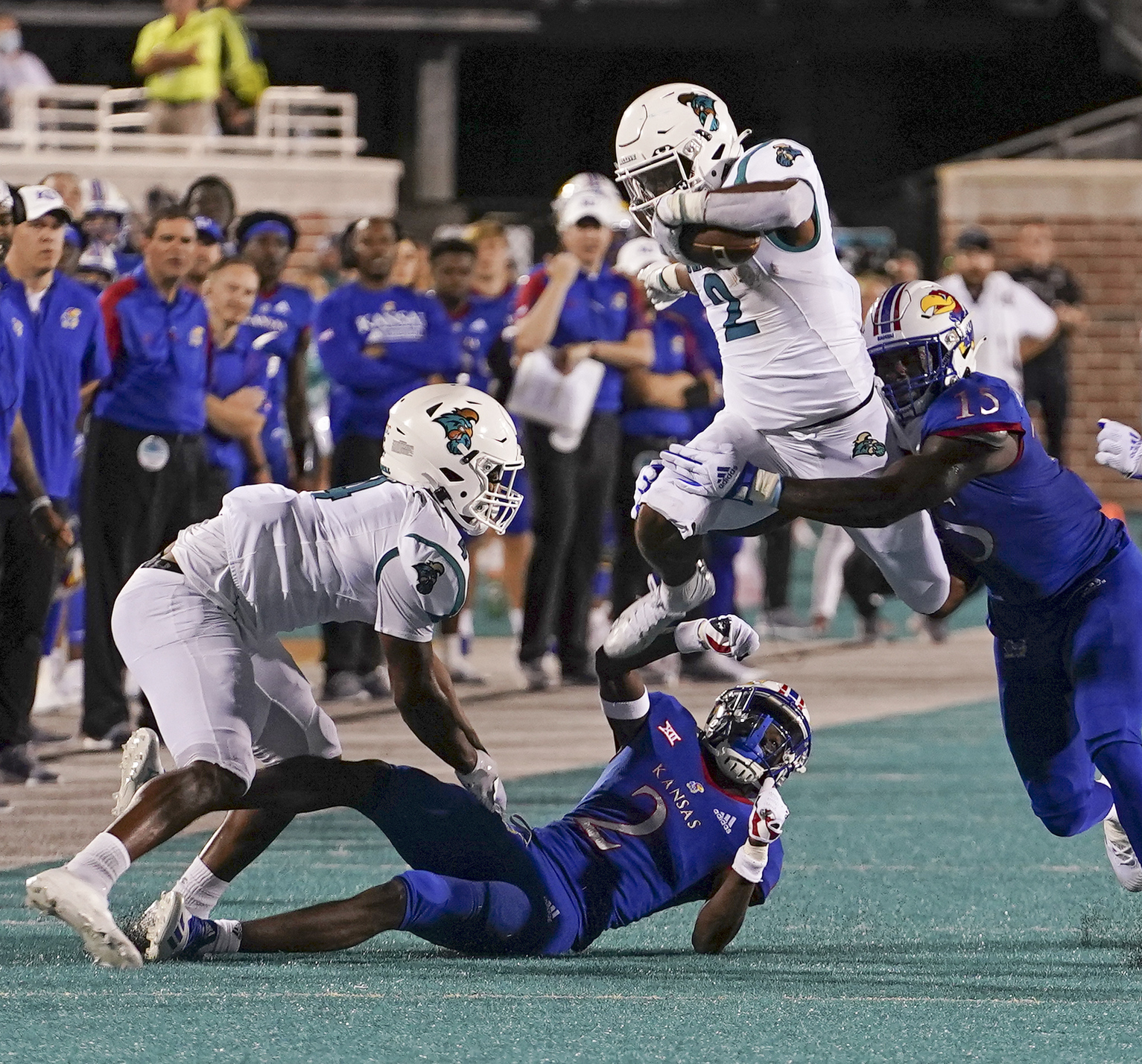 Sometimes the final score doesn’t always tell the whole story of the game. Despite losing by 27, the Jayhawks showed some life on Friday night against the 17th ranked team in the country.

It’s not often a power five school travels to a Sun Belt school but here we are on the weird colored turf that is home to none other than Coastal Carolina.

The Chanticleers have been college football darlings since last year and are favorites to win the Sun Belt once again this year. So, when the Big 12 cellar dweller Kansas came to town, not much was expected of the 26.5-point underdog.

While the final score was not all that surprising, I came away a little bit impressed with the Jayhawks. They remained competitive for nearly three full quarters and if we are being honest, Kansas made some key mistakes that cost them some points.

The Jayhawks were fresh off a win against South Dakota last week but taking on a top 20 team on the road is a different animal. However, early on it looked like Kansas was the team who stepped up to the challenge early.

To start the second half, Bean would once again use his legs to find the endzone this time from 46-yards out to pull Kansas within six, But, after that, the offense stalled out and Costal Carolina pulled away scoring 21 unanswered to end the game for the 49-22 victory.

Normally, I wouldn’t think twice about this game due to the score, but I did see Kansas make some improvements. While the jury is still out on Jason Bean’s arm, his ability to run the football adds a crucial layer to this offense as he led the team with 102 rushing yards and two touchdowns.

While his runs kept Kansas respectable for a while, eventually the Jayhawks were forced to throw the ball and Bean ended up being under heavy pressure for most of the night. The offensive line needs some work, but it does appear Kansas has a quarterback who is capable of making plays when they aren’t always there.

The Jayhawks still have some work to do defensively but tonight the big takeaway is that Kansas is still making some major mistakes. A blocked punt and extra point, a missed extra point and going 0-5 on fourth down did not help Kansas at all.

I am not sure if this team will win another game this season but if they can clean up the mistakes they made on Friday night, they can compete with teams more so than what they did last year when they went 0-10. Rome was not built in a day, and neither will Kansas football be but at some point, this team will need to play a clean game or else it will be another long season for the Jayhawks.